There's a lot of great josei that got completely overlooked in the 2000s, and few were as overlooked as this title. 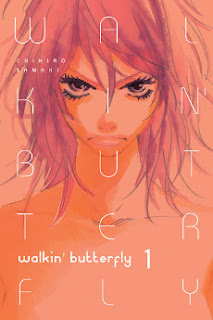 Michiko has always been taller than average.  By the time she turns 19 she's over six feet tall, and years of teasing, comments, and insults from others have given her a major complex about her height.  She feels physically and psychologically isolated from the world, to the point that she dropped out of school and is now stuck in a series of dead-end jobs with a gaggle of fellow dropouts.

Michiko's world changes when a pizza delivery gone wrong leads to her being mistaken for a model.  When a designer declares that she will never be a proper model, Michiko is inspired like never before.  Now she'll take on anyone and anything to become a model, if simply to show that cocky jackass just how wrong they are.

If you can imagine what would result if you threw Paradise Kiss and a shonen action manga into a blender, then you have some idea of what Walkin' Butterfly is like.  This might technically be a josei manga, but Michiko has the drive and burning spirit of a shonen hero (even if it has its roots in some very real anger and mental issues.)

While this first volume maybe lingers a little too long on establishing Michiko and her mindset, her problems are innately relatable ones.  In a culture that values being short and girlishly cute as the feminine ideal, Michiko stands out like a tall, gangly, tomboyish thumb.  She's internalized a lifetime of jokes and comments about her body (even from her own mother) and because of it she can't perceive her own beauty or that anyone else might find her attractive.  She can't even muster up the courage to confess her love to her best friends, and the fact that most of her pals see her as just 'one of the boys' doesn't help things.  On top of all that is her short temper, which leads her to blow up at the slightest offense.  Michiko is not the easiest character to love, but it is easy to understand and sympathize with her.

In comparison, her entry into modeling feels a bit more rote.  The circumstances that lead to it are almost akin to a meet-cute, even if it takes Michiko a while to put together the pieces and much of the work is done by a conveniently roving director.  This leads Michiko to her total lush of an agent, who calls Michiko's raging insecurity at a glance.  Indeed, most of the adults in Michiko's life can recognize that the girl is an insecure mess, and it takes most of the book for Michiko to do something about it other than bitch at herself and lash out at others.  Admittedly, this leads to the best moment in the volume, wherein Michiko quietly confronts her agent.

The only other character of note is Mihara, the designer whose comments spur Michiko into modelling.  He's supposedly this revolutionary genius in the field of fashion, but what we mostly see is a petty bastard who abuses and scorns his staff at every turn.  At this point, he's more of a catalyst than a character.  I just hope that he doesn't return as a love interest or something similar.  Michiko is troublesome enough - this manga doesn't need TWO difficult assholes.

Walkin' Butterfly isn't perfect.  Its first half might be a bit aimless, but it feels a lot stronger than the second half.  Yet Michiko brings a ferocity that is seldom found in English-language josei books that's fueled by a very real and relatable sense of self-loathing.  It's Michiko that makes this story compelling; like herself, it's a diamond in the rough.

Tamaki's art style will feel familiar to readers familiar with the likes of Moyoco Anno and Yayoi Ogawa.  On one hand, the character designs remind me of Ogawa, as while there's a good degree of variety they all tend to retain some of the shojo-esque cuteness of more mainstream josei.  On the other hand, there's something about Michiko's fierce and frank glances and Tamaki's harsher linework that reminds me of the former.

I really like the way Tamaki draws hair, be it Michiko's messy, windswept mop, Mihara's artful scribble, or the agent's dark, rumpled style.  She also handles bodies well, and we see this in the most literal fashion possible when Michiko strips nude towards the end of the chapter.  Michiko actually looks like a tall, skinny, modestly busty young woman (complete with pubes!)  She's also quite good with panel composition - she knows how to employ a close-up or a shift in angle at just the right moment.  Even the cover art is striking, with its warm peachy color and Michiko's confrontational glare lurking just behind the title.

Sadly, the lettering here leaves a lot to be desired.  The font is terribly plain and tiny, and it makes the panels feel emptier than they were clearly intended to be.  It also has very stiff binding, something that was apparently common with a lot of Aurora's early releases.  When combined, it makes Walkin' Butterfly literally hard to read.

It kills me that Aurora went out of business before they could finish Walkin' Butterfly.  Tamaki's art is familiar and appealing, but the raw emotion of the story kept me captivated.  This is a title that deserved to be a critical darling instead of getting lost in the burst of the 2000s manga bubble.

This series was published by Aurora Press.  This series is complete in Japan with 4 volumes available.  3 volumes were published and are currently out of print.