This month provides me with a good excuse to go back to the CMX well, which always produces something interesting. 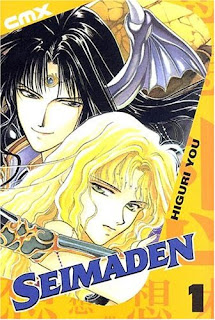 Hildegarde is a beautiful, graceful dancer haunted by a past she can't remember.  She spends her days in a small town full of refugees and other forgotten people like herself.  She ends meeting with two men who are fascinated by her beauty and seem to know something about her past.  The first is Laures, a powerful demon prince who swears he will win Hilda's heart.  The other is Roddrick, the last survivor of a magical race that swears Laures is lying.  Hilda isn't sure who to believe, but she fears that they will destroy the town in their pursuit to possess her.

Seimaden is the sort of pulpy shojo fantasy that was all the rage in the 1990s that makes me feel weirdly nostalgic.  You simply don't see this kind of story anymore, with a heady balance of drama, romance, and fantasy that draws the reader in and keeps them captivated regardless of how cheesy things may get.

If there's any downside to Seimaden, it's that its heroine is very quickly overshadowed by her own love interests.  You Higuri makes it pretty clear from the start that her favorite is Laures.  Poor Roddick just can't compare when Laures shows up first, has the more elaborate and alluring character design, and has more impressive (if not outright explosive) magical powers.  Higuri makes her favoritism known in other ways.  Laures is set up as a Lucifer-like figure, a demon prince who has fallen so hard for Hilda that he neglects his realm (much to the eternal frustration of his vizier Tetius.  Mostly I just found his angst eye-rolling, and unless Roddick gets his own dramatic backstory in a later volume it feels like Higuri is tipping her hand too soon towards her particular favorite.

Nevertheless, they are the ones who end up steering the story forward with their endless tug-of-war with Hilda serving as the metaphorical rope.  She has no way to verify either man's claims and no means to counter their destructive tendencies.  She's not completely passive - she does keep turning down Laures every time he hits on her - but I do wish she spent less time fretting and falling unconscious and a little more time time pursuing her lost identity.  At the very least, Higuri could spend a lot less time finding excuses to have random men threaten Hilda with assault (sexual or otherwise) so that either Laures or Roddick can save her.

In the past, I've expressed my appreciation for You Higuri's art.  Even at this early stage in her career her artwork is polished and consistent in quality.  Clearly, her standards for character designs were set during this and changed very little over the years because this cast has all the hallmarks of 1990s shojo design.  The characters are tall and alluring, and Laures's permanent eyeliner and dark lips give him a certain gothic flair.  The poses and expressions are all very graceful, something that's most obvious when Hilda dances.  That same elegance extends to the layout, as Higuri's paneling grows more confident and smooth with each new chapter.  I just wish she had brought some beauty to the setting itself.  The city's crumbling walls and anonymous alleyways just don't stimulate the imagination in the same way that the character art does.

I rather like the translation here, which conveys the perfect level of drama without sounding overly stiff or florid.  I just wish I knew precisely whom to credit.  The book credits Tony Ogusawara, while Anime News Network says it's Jonathan Tarbox.

Seimaden draws you in with beautiful visuals and high emotion.  I just wish the mangaka wasn't so particular about her favorites and let her heroine shine a little more.  Still, fans of vintage shojo and You Higuri should absolutely seek this one out.