Sometimes a character designer can successfully make the leap from animation to manga.  Today is an example of a beloved old-school designer whose leap was not quite so graceful. 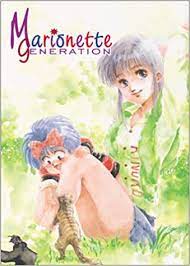 Izumi Morino is a down-on-his-luck artist who gets the shock of his life when a walking, talking rag doll shows up in his bed.  His wanna-be assistant/teen fangirl Kinoko is jealous from the start, but neither they nor the doll herself knows how she got there or how she came to be.  The answer may lie with the aggressive blonde doll-woman who keeps following them, but can Izumi and Kinoko get past their own personal problems long enough to notice?

The plot of Marionette Generation feels as aimless as its protagonist.  It's never sure whether it wants to be a snapshot of Izumi and Kinoko's journeys of personal growth or a bit of magical realism about sentient dolls who are clearly more than what they seem.

I strongly suspect that Izumi's lack of artistic inspiration is more autobiographical than Mikimoto meant it to be, in spite of the many joking asides that it's not.  He doesn't seem to have much faith or focus in anything, as the story drunkenly wobbles between Izumi and Kinoko's awkward romantic drama and the fantastical living doll business.  The more I read, the more I suspected that Mikimoto got his pitch for this manga approved not on the strength of its narrative or characters but instead on the fact that he was still riding high on his fame as a character designer for then-recent projects like Gunbuster and Gundam 0080 along with the ongoing Macross franchise.

If he or the editors thought that this manga could coast on the strength of its characters, they were deeply mistaken.  Izumi is a wishy-washy twerp who vacilates between "low-key thirsty for pretty girls" and "still sad about his ex."  Kinoko is little more than a collection of tsundere and Childhood Best Friend (tm) traits who mostly exists to shriek at Izumi to work more, shame him for his thirst, and make regular and EXTREMELY awkward come-ons to him despite being literally a junior high student.  Thankfully, Izumi never responds to her efforts and basically treats her like a kid sister he can't shake.  Still, neither of them are particularly compelling, together or apart.

As for the mysterious doll (who is saddled with the unfortunate nickname of "Lunch" late in the volume), there isn't much to say yet.  Her amnesia leaves her without much of a personality to speak of, which makes it all the harder for the reader to get invested in her plight.  Even if you were invested in that mystery, Mikimoto drops it after the first confrontation with the other doll-girl and doesn't pick it back up again until the end of the book.  Even then, he barely scratches the surface of that plot line and doesn't even offer up so much as a hint as to what the truth may be, so it doesn't really work as an enticement to keep reading.  If the mangaka hasn't yet figured out what he's doing with this series, why should the reader do the work for him and keep reading?

Mikimoto's storytelling leaves a lot to be desired but his artwork is as on-point as it was ever was.  The characters feature all the classic traits of his work: dark, wispy hair; soft, sensitive profiles, tender eyes, and all of it drawn with a delicate hand that only enhances their looks.  It's a style that works well with Mikimoto's light and breezy approach to page and panel layout.  If there's anything that spoils it, it's Dan Nekrosis's lettering.  This is one of the last titles that Viz would release flipped with redrawn SFX, and he absolutely goes ham with fonts, screentones, and even word choices for said SFX.  He goes so hard that at times it starts to clash (if not overwhelm) the original art, becoming a distraction.

While I can see Marionette Generation being of interest to Mikimoto fans, I have a harder time believing that modern readers would put up with its odd premise and lack of focus for very long.  Maybe Mikimoto should have just made another artbook - he's at least good at that.

This series was published by Viz.  This series is complete in Japan with 5 volumes available.  All 5 were published and are currently out of print.