Remember the old days, when getting sucked into a video game was all the rage in video games?  This manga certainly does. 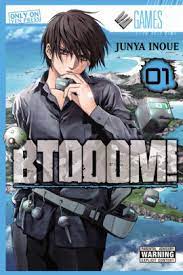 Ryouta Sakamoto has big dreams.  Sure, he might be unemployed right now, but surely his prowess at online games and occasional gig as a beta tester will lead him to the career of his dreams!   His skills are put to the ultimate test when he wakes up one day in a real-world version of his favorite game.  Ryouta is now stranded on a strange island with a light implanted in his hand and a handful of supplies, and his only imperative is to survive.

I'll give Btooom! this much credit: at a time when a lot of anime and manga were jumping on the "sucked into a video game" premise, they found a new spin to give it.  Combining it with a Battle Royale-style survival game was a novel combination.  If only that novelty had been in service of a better protagonist.

Ryouta just flat-out sucks.  He's stuck-up and temperamental, putting more importance on his skills a gamer than he does on any marketable talents.  He sees himself as too good for a blue-collar job and is oblivious to the fact that the video game company he worked with before has no interest in him as a permanent employee.  He even goes so far as to beat his mother for daring to suggest that Ryouma get a job to earn his keep.  Ryouta is the worst sort of NEET possible and I hated him.

I got a bit of schadenfreude watching this self-important little shit have to grow up the hard way through a game of literal life and death.  Ryouma becomes a lot more fearful and uncertain once removed from his routine, forced to forage and to interact with others to survive.  He also gains a distaste for death after he's confronted with the messy reality of blowing someone up.  All that being said, I'm terribly afraid that once Ryouma gets his bearings, the story is going to forget all of this character development.  He's already got a love interest who has had more panty shots than words to say and he's pulling increasingly ridiculous solutions to his troubles out of his butt.  At this rate, Ryouma is going to actually become the ultra-cool gamer dude he always perceived himself to be and I can't think of a worse development.

The most inspired bit of artistry here is the cover design, which is meant to evoke the cover of an XBox 360-era shooter.  The content inside it can't really compare.  There's a decent variety of character designs, the jungle backgrounds are dense and decently drawn, and there's some interestingly dramatic lighting at times, but the rest of it is rather plain and the action leaves a lot wanting.

The novelty of the premise doesn't seem like it'll be strong enough to keep Btooom! from turning into another self-indulgent otaku fantasy.  It's just that this one is inspired more by shooting and survival games instead of generic JRPGs.

This series was published by Yen Press.  This series is complete in Japan with 26 volumes.  All 26 volumes were released and are currently out of print.