The older I get, the more I struggle with shojo manga.  It's hard to maintain one's enthusiasm when faced with so many titles like this. 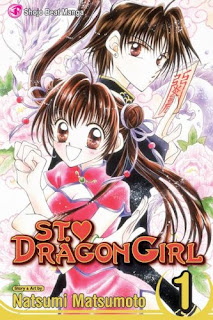 Momoka is a spirited (if somewhat hapless) young martial artist.  At her side is Ryuga, a master of magic and Momoka's childhood best friend.  When a mutual friend of theirs is threatened by a dragon king, Ryuga summons a dragon god that ends up getting sealed into Momoka.  Her newfound power makes Momoka an attractive prospect for malicious spirits and humans alike, but Momoka's greatest challenge might be overcoming her reluctance to telling Ryuga how much she truly loves him.

St. Dragon Girl has a few things going for it.  It's got a lot more action that you would expect, with every chapter featuring a bit of kung-fu or paper talisman slinging.  Its Chinese aesthetic isn't particular deep or culturally accurate, but it gives the series its own unique flavor.  St. Dragon Girl needs all the uniqueness it can muster because it's built around a very frustrating and formulaic relationship.

Unless you are young as the girls originally reading this in Ribon magazine, you have definitely seen couples like Momoka and Ryuga before.  She's spunky, he's kind of a dick to her in a big brotherly sort of way, and both of them would rather snipe and hint at one another than ever admit that the other makes their heart go doki-doki.  Momoka in particular takes a very immature stance, literally pushing Ryuga and running away anytime he hints at it.  It gets to the point where every chapter seems to revolve around some new opponent posing as Momoka or Ryuga so they kiss or proclaim their love to the other before they are defeated and the status quo button is pressed once more.  It gets exhausting before this first volume is over, so I can't imagine how Matsumoto was able to stretch this out for so long.

Matsumoto draws in what was basically the Ribon house style of the time: spindly, saucer-eyed characters in overly fussy costumes who are frequently drowned out in an excess of flowers, screentones, and magical effects.  It's a very busy-looking manga, and while that fits to some degree with Momoka's personality it also gets a bit hard to parse after a while.

St. Dragon Girl might please younger and more inexperience readers, but shojo veterans are unlikely to have enough patience for its immature lead couple and lack of distinct style.

This series was published by Viz.  This series is complete in Japan with 8 volumes available.  All 8 were released and are currently in print physically and digitally.