You have to try really hard to make an ecchi manga that stands out, particularly if you were making one in the time before monster girls.  This one...well, it certainly tried. 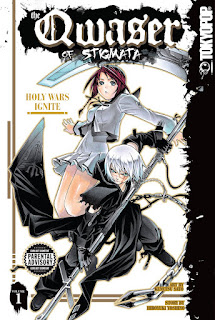 Tomo and Mayuri are two sisters who are left adrift after their uncle/guardian disappears.  Their home is converted into a school dormitory shortly thereafter and the new dean's daughter has made it her mission to make the girls miserable.  Mayuri gently accept their fate with the hope that someday things might get better, but Tomo is picking for a fight.  They soon find an ally in the form of a strange Russian exchange student on the hunt for a legendary Orthodox icon hidden somewhere in the school.  He and Tomo must somehow find a way to get along if they are to find the icon and protect it from those who want to use its power for harm.

You might look at the story summary above and presume that Qwaser of Stigmata is a fairly innocuous title and not all that different from any other C-tier shonen manga on the shelves.  You would be wrong, though.  After all, how many shonen manga out there are based around the Russian Orthodox church, chemistry, and lactation?

No, I am not making that up.

Yes, that combination of ideas is about as awkward as you might expect, and then some.

You might presume at the start that Tomo is our protagonist.  As much as I appreciated her willingness to take on any and all comers, she's quickly shoved into the background to provide a lot of tsundere shrieking and to be damseled as the plot demands.  That's only marginally better than Mayuri, who is a victim beginning to end.  Even when she's brainwashed by the villains, she never manages to display any sort of personality and is basically a useless load of a girl.  This is an ecchi title, after all - we can't have girls going around having any sort of control over their bodies or their fates!

No, the true protagonist here is Alexander, the aforementioned exchange student.  He's an insufferable asshole who is always pushing others away in a fashion that's clearly meant to be noble but only serves to make him an absolute dick.  The only decent thing he does for anyone is take down the resident mean girls for Tomo.  He is also the resident Deliverer of Exposition, which involves a motley collection of Russian Orthodox terminology, random bits of art history, and a bunch of trivia about magnesium and weird alloys.  To the surprise of no one, Yoshino has no more grasp on the details of Orthodox Catholicism than most Japanese creators do about Roman Catholicism.

Something else that Alexander does is power up his attacks (which of course involve a giant cross-scythe) by breastfeeding.

At this point I should be used to mangaka inserting their favorite fetishes into their work, particularly ecchi mangaka.  That being said, this is going above and beyond your usual level of ecchi kink.  Yoshino tries so hard to tie this into all the Orthodox nonsense with a lot of talk about icons where the Virgin Mary nurses baby Jesus, but that only serves to make things more uncomfortable.  Things only get hornier when the villains show up, who are all dressed like bondage queens (when they are dressed at all) and proceed to bind, strip, molest, and exploit our heroines at every turn.  I do find it hilarious that all of this imagery is OK, but the translation censors its curse words despite having a Mature rating and parental advisory warning on the cover.

This manga is one of the few times where the author's note explains everything about why the manga exists.  The tone is set straight away with the first sentence: "Hello, do you love breasts?  I love them very much!!"  From there he explains that he mostly works on anime and that he used Qwaser of Stigmata to indulge in all the things he couldn't write about normally: religion, nudity, excessive violence, and so on.  Everything made sense after reading that.  No wonder this manga was ridiculously edgy, horny, and indulgent - it's Yoshino's release valve.  That being said, he should have stuck those impulses somewhere where the general public wouldn't have to deal with it, like a Deviantart page or a livejournal.  That way, once he realized how embarrassing it all was, he could have just deleted it and gone on with his day.

With a plot like that, you can expect Sato's art to be as tasteless as possible.  The character designs are rather boring, even if half of them dress like monks with wardrobes by a Final Fantasy X-era Tetsuya Nomura.  The other half are mostly in some state of undress.  Panty shots and bare breasts abound in this manga, and all of it is frame with the raw sensuality of a tuna fish sandwich.  That includes the breastfeeding, which comes off as more awkward than anything else.

Sato has no idea of how to draw a proper action scene.  All of them are just a pile of swirling speedlines that are nigh-impossible to follow.  The only mildly interesting visual was the way Sato would sometimes simulate a fish-eye lens.  In fairness, we all know that everything is better with a fish-eye lens.

This series was published by Tokyopop.  This series is complete in Japan with 24 volumes available.  2 volumes were published and are currently out of print.