I want to state for the record that I am NOT anti-monster girl.  I'm just very particular about the kinds of monster girl manga that I like. 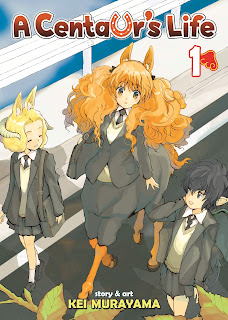 In a world populated with all sorts of half-human races lives Himeno the centaur girl.  She lives out her days with her centaur family, as well as her draconoid friend Nozomi and goat-like friend Kyoko.  Together they live out their everyday lives as they deal with the challenges of a world that must make accommodations for all the various races, be it racism against Antarctic snake people, the ethics of riding a centaur, or coming to terms with non-human genitalia.

I remember reading this for the first time, at the height of Monster Musume-mania.  I was skeptical that it could be anything other than more pervy garbage.  Instead, it remains one of the few monster-girl titles I have ever liked.  How is that possible?  The secret is that it's not so much about showing off the mangaka's fetishes as it is about fleshing out the world around those monster girls.

The world of A Centaur's Life is at once strange yet familiar.  The social and civil structures are more or less identical to our own, and the few peeks we get of the larger history and politics of its world seem to follow our own.  That includes some of the less savory qualities as well, including references to slavery in its past and the still-active prejudice against the Antarcticans.  (Don't call them 'snake people' to their face, it's offensive.)  These elements add color to Murayama's world and lend it a degree of verisimilitude.

The three primary girls are all pleasant enough and most of them manage to escape the usual moe girl archetypes.  Himeno gets dangerously close to it at times.  Despite her size and weight, she's sweet-tempered and shy, not terribly bright, easily scared, and fond of sweets.  That being said, these are also qualities that can often describe a lot of real-world horses, so maybe Murayama did that as a bit of a joke.  Personally, I preferred Himeno's dragon-girl friend Nozomi.  She's a sassy little tomboy with a bit of a dirty mind, and I found her kind of delightful.

The story (such as it is) is pure slice-of-life, with each chapter centering on things like school plays and track meets.  That being said, the first chapter is the only questionable part of the story and it's going to make or break whether you keep reading this or not.  It's about Himeno feeling insecure because she's worried that her vagina looks more like that of livestock than anything else.  Her friends try to reassure by basically showing her theirs and then looking at hers in turn.

Years after reading it for the first time, I'm still of two minds on this chapter.  On one hand, insecurity about one's body (and genitals in particular) is something that a lot of teen girls have to grapple with and the whole thing is framed as innocently as possible.  Yet there's no denying that this is a premise that could have come straight out of a porno and that it sets up expectations that are different than what the rest of the volume delivers.  So long as that first chapter doesn't completely throw you off, there's still a lot to enjoy here.

Murayama's art is also a lot better and more thoughtful than one typically sees in monster girl manga.  The detail is fine and dense, but the style itself is very realistic and ordinary.  I do wish they tried to vary up the characters' faces a little, as they rely a lot on the same sort of generically cute anime girl face.  Still, they clearly had fun thinking up all the ways one would need to change up everyday accommodations and objects to make them usable for people with wings or four legs and incorporates them in practical, effortless ways.

Just as Monster Musume included a preview for this series, so too does this include a preview for Monster Musume.  Even now, I question this move.  It still comes as crass in comparison and aside from the 'monster girl' angle these two manga couldn't be more different in genre and tone.

A Centaur's Life remains one of the few monster girl mangas I have ever sincerely loved, in part because of how much thought Murayama put into its world and its look.  Give a shot and just try to pretend that the anime adaptation never happened.