Sadly this is the last remaining title from Matsuri Akino to talk about here, so let's make this review a good one. 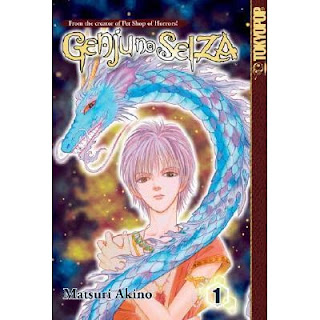 Fuuto Kamashina has spent his live wandering from city to city with his mother, never staying anywhere long enough to make a friend.  Then one day a massive bird-man named Garuda appears to him, declaring him to be a king.  More specifically, Fuuto is the true reincarnation of the king of Dhalashar, a faraway kingdom currently ruled by a pretender to the throne.  Fuuto tries his hardest to deny his destiny, despite the fact that he's manifesting new powers and memories and seems to be the only person who can see Garuda's true form, but he can't run forever when other mystical creatures start attacking him in the name of the false king.

I'm really excited to talk about this series, as in the past I've praised other Akino manga such as Petshop of Horrors, its sequel series and Kamen Tantei.  In some ways, Genju no Seiza reminds me of Petshop of Horrors.  Once the scenario is set up, it's mostly composed of single chapter morality tales with ambigious endings.  The big difference between the two is that Genju no Seiza is far more plot-driven.  It's far more invested in Fuuto's personal journey than Petshop was in its deutagonists.

He's certainly got a long way to go to be ready for the throne.  Fuuto starts out as prickly, standoffish, and under-socialized.  He's more concerned with modern comforts likes video games than he is about some god-forsaken country he's never heard of (that is totally not an analogue for Tibet, no sir).  He gets better as the volume goes on, mostly thanks to his growing friendships with a researcher and a physically handicapped girl with mystical powers of her own, but he remains skeptical of his fate in spite of his growing list of supernatural powers.

Meanwhile, Garuda gets relegated to performing fish-out-of-water comedy bits when he's not defending Fuuto from the dragon god Naga and his minions.  Fuuto ultimately wins Naga over, adding to his collection of animal sidekicks (to the point that people start making jokes about him being Momotaro).  Again, when I see a blonde guy arguing with animals that only look like animals on the outside, it's hard to not be reminded of Akino's previous series.  What can I say, she's writing what she knows and she does it well.  Still, there's enough that's new and different here to keep me hooked.

I've always admired Akino's art.  While it's mostly very typical of shojo manga of its time, there's a certain delicacy and attention to detail that Akino brings to her manga that makes her style unique.  It's also amazing how much emotion she can get out of these characters, especially when you consider that many of Fuuto's spirit companions are part animal.  She's certainly not afraid to let things get bloody, but these moments are not as frequent as they were in Petshop.  Backgrounds are nicely drawn when pleasant and Akino goes light on the screentones here, saving them primarily for the various psychic powers.

Genju no Seiza is proof that Matsuri Akino was no one-trick pony.  It has all the humor, spookiness, and fine art of her previous work, but it distinguishes itself with a more engaging and linear plot.  Now if somebody could just rescue it and finish it...

This series was published by Tokyopop.  This series is complete in Japan with 14 volumes available.  8 volumes were released and are currently out of print.