School clubs as a venue for friendship and romance are just as common in shojo manga as they are in shonen, but this one brings at least one welcome twist to the formula. 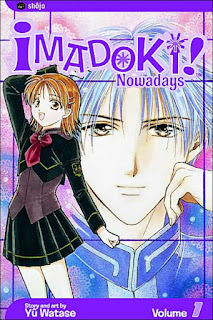 Tanpopo Yamazaki came all the way from Hokkaido to attend the prestigious Meio Academy in Tokyo.  On her first day there, she encounters a young boy tending to a flower as if it were a friend.  She couldn't have possibly expected that same boy to be Koki Kugyo, the heir to the school itself.  Neither did she expect the entire student body to turn on her for daring to talk to Kuyo while not being rich.  Tanpopo won't let that get her down, though.  She's determined to get to know the real Kuyo, even if she's got to strongarm him into the newly created gardening committee!

Review: HAGANAI - I DON'T HAVE MANY FRIENDS

September means back-to-school time, complete with kids joining and rejoining school clubs.  We'll be doing the same by reviewing a month's worth of manga about school clubs, although today's review is perhaps not the best example to start with.

HAGANAI: I DON'T HAVE MANY FRIENDS (Boku wa Tomodachi ga Sukunai), based on the light novel series by Yomi Hirasaki with art by Itachi.  First published in 2010 and first published in North America in 2012. 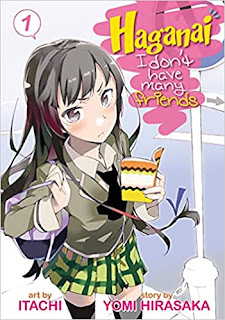 Hasegawa Kodaka is a new student who finds himself ostracized due to his naturally blond hair and rough looks.  By chance he meets up with Mikazuki Yozora, who would be charming if she weren't so paranoid and obsessed with talking to her imaginary friend.  Neither of them are good at making friends, so they decide to start a school club that's all about making friends...somehow.

They manage to rope in a couple more members, including the busty and beautiful Sena, who is the daughter of the school director.  Together they try to make friends through video games, but can Yozora and Sena stop fighting among themselves long enough to make it work?

Older comedy manga don't always age well, but here's a rare example of one that has.

Deep under the streets lies the headquarters of ACROSS.  It is a secret organization with only one goal: total world domination.  To bring this about, ACROSS's leader Il Palazzo sends forth his two henchwomen Excel and Hyatt to complete his top-secret missions.  Fortunately for the world, Excel is an idiot who is prone to talking too much and Hyatt is prone to dying a lot.  There's also the matter of interfering neighbors, Excel's pet dog/emergency food ration Mince, the many part-time jobs Excel has to take to pay the bills, and the fact that Il Palazzo's plans are never terribly well-defined.

Let's take a look at one of the most recent retro releases from this year - a new selection from the vast library of Osamu Tezuka.

Tetsu's young life is one that's full of misery thanks to his resentful, abusive parents, bullying teachers, and his own sense of self-loathing.  The only thing that gets him through the day is thoughts of his teacher, Miss Mizushima.  The deeper his obsession with her grows, the more often he begins to hear phantom horse hooves and see visions of a spectral horse.  Soon Tetsu discovers that he can control this phantom horse, and bids it to kill anyone who gets in the way between him and the woman of his dreams.

It took me a bit to recover from the excitement of Otakon, but I'm back to deliver yet another Old School Month!  Let's start with an obscure little treasure from my own personal collection. 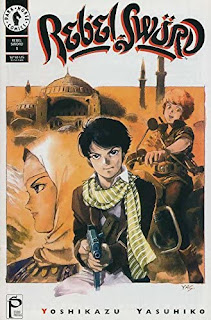 Jiro is a half-Turkish, half-Japanese boy who hasn't seen his parents in years since they disappeared somewhere in Turkey.  Out of the blue, he gets a letter from his mother urging him to come to Istanbul.  What Jiro finds is a strange man and a strung-out belly dancer claiming to be his mother, but that's the least of his worries once the military show up.