Review: BAMBI AND HER PINK GUN

When it wasn't churning out one mediocre BL manga after the next, manga boom-era DMP would sometimes go out on a limb and license something crazy like this. 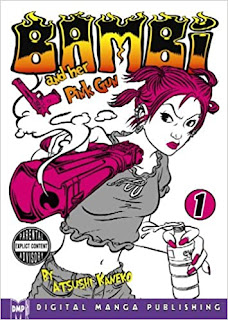 A mysterious email was sent out to every assassin, hitman, and petty crook in the era.  There was a little boy stolen by a woman with a pink gun known as Bambi.  The reward for him is 500 million dollars, so long as he remains unharmed.

Of course, to get to him they have to get past Bambi.  That's no easy feat, as she has no respect for others and no reservations about shooting anyone who gets in her way.  Her motives are as mysterious as her background.  She doesn't even seem to be all that fond of the kid.  All that is certain is that she's going to get him to the old men she keeps talking about, one way or another.

Bambi and Her Pink Gun is wild, even by manga standards.  It doesn't seem to take much (if any) influence from the manga world, instead drawing upon the indie side of Western comics.  The most obvious influence is Tank Girl and similar sorts of 'riot grrl' media from that time,  but others more schooled in the history of underground comics than me have noted influences here going back to the 1970s.  There's also a lot of punk sensibility, right down to the title (which itself is a reference to a deep cut from The Sex Pistols).

Beyond that, this manga is basically one long, weird, bloody, post-apocalyptic road trip.  For the longest time it's just Bambi and the kid (later dubbed "Pampi") encountering one desperate criminal after the next, grousing the whole time.  A few messy head shots later, Bambi is on her way, all while her hostage naps or snarfs down whatever junk food he can get his hands on.

Things become somewhat clearer when we're introduced to a man whose name has been scattered all across the background through the whole book: Gabba King.  He's a fat bastard who resembles Elvis whose music drives his fans into orgiastic frenzies and who slaughters his drugged-out hordes of groupies with abandon.  While we learn how Bambi was connected to him and how she got the kid in the first place, but there's a lot that's left unsaid.  In fairness, it doesn't really matter to me if we ever get to the bottom of where Bambi came from, why she's so obsessed with natural food, or who these supposed 'old men' are supposed to be.  She's more of a force of nature than anything, sweeping indiscriminately through the garbage of a ruined world.

Tanaka's art is as equally bold as the story he weaves.  There's a frank, sneering ugliness to the character designs, even in the more conventionally attractive ones like Bambi.  The same could be said for the world around them, full of barren deserts and decaying, industrialized towns, all of it rendered in bold, thick, unpolished linework.  If there is anything resembling beauty to be found here, it's in the chaos of the action.  Action scenes often end up exploding in blasts of smoke, blood, blocky hand-drawn sound effects, and junk.  Sometimes the very panel layout seems to collapse in on itself like a falling wall.  If there's anything that does the artwork no favors, it's DMP's choice to print the book entirely in pink ink.  Yeah, I get the obvious connection but it kind of takes away some of the grittiness of it all.

Bambi and Her Pink Gun is a harsh, weird, edgy, fascinating sort of manga.  It absolutely deserved a better publisher in its time, as it never fit with the rest of DMP's books (or audience).  These days the license deserves a rescue by a company that knows how to handle such material and get it to the audience it deserves.

This series was published by Digital Manga Press.  This series is complete in Japan with 6 volumes available.  2 volumes were released and are currently out of print.