Supernatural-themed BL is not too uncommon, but today's review might be a first.  After all, how often do you read a manga about gay werewolves? 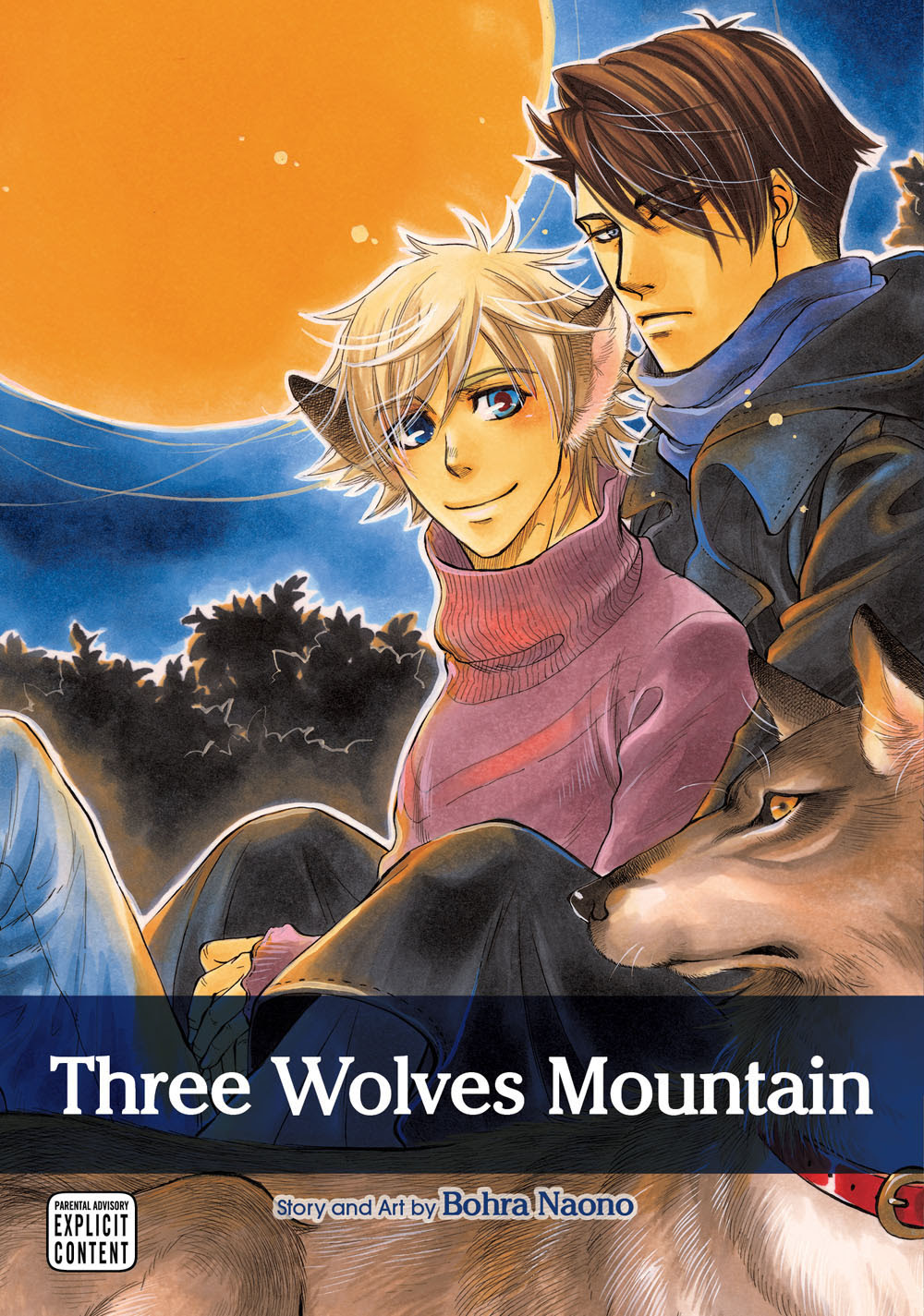 Kaya Susugi leads a lonely life.  He spends his days running a quiet café and his nights guarding a mountain cemetery from both natural and supernatural threats.  During one of his patrols, he stumbles across a strange man and a large wolf that turn out to be a pair of werewolf brothers.  The younger of the two, Jiro, is drawn to Kaya's cool demeanor and understated kindness.  The two are forced to come to terms with their feelings when elements from Jiro's world and beyond threaten to tear them apart.

Supernatural romances might be a dime a dozen in the world of manga, but this has to be the first time I've seen a BL one delve into the strange and kinky realm of werewolf sex.  What's strange is that the most unappealing part isn't the fact that the story involves screwing wolfboys.  After all, once you've read something like Love Pistols it's going to take quite a lot to top THAT. No, the part of it that doesn't work for me is the way that Naono forces her main couple to get together.

I can kind of see what she was going for here with Kaya and Jiro.  Jiro is meant to be the cheerful, honest ingénue that defrosts the heart of the kind yet tormented ice queen (or should that be ice king?)  The problem is that Naono doesn't give the reader opportunity to understand these two as characters in their own right.  Without that, Jiro's declarations of love don't feel like heartfelt emotion but instead something like Dug from Up declaring that he loves you because you are his master.  It's a literal case of puppy love!  Weirder still, Kaya returns this feeling almost instantly with no build-up whatsoever.  One moment, they're having a conversation, then BAM! Sexy time!  Later chapters only get more shameless with their excuses for sex, be it Jiro going to into heat or him simply wanting to get on top at times.

Since Naono throws these two together so quickly, she has to throw in complications to keep them apart just as fast.  It seems Kaya's got an older brother who has stuck around as a ghost, and this part gets kind of awkward.  In Naono's universe, ghosts stick around solely to mess with the living for their own selfish pleasures and Kaya's brother is no exception to this.  He's not only envious of Kaya's life, but he's also disturbingly touchy-feely with Kaya thanks to the years of sexual abuse at the hands of their uncle.  Still, this forces Kaya to not only come to terms with his past but also to reaffirm his devotion to Jiro.  Now this sounds like a perfectly fine conclusion for the both of them, right?  Well, this happens a third of the way through the volume.  We're not even halfway through the volume and Naono has already blown her narrative wad prematurely.  So what do you do when you're struggling to pad out your gay werewolf story?  Add more werewolves!

Yep, Kaya gets to go meet his kinda-sorta-in-laws when he goes off to meet Jiro's family.  It's fluff for the most part as we see that Jiro comes from a mixed-race family, with a strict human father and a ditzy yet forceful werewolf mother.  Then another evil werewolf comes along to threaten them all, and after a bit of post-injury comfort sex the whole gang comes to live at the café and it becomes one big half-furry family.  At least this arc gives Jiro's older brother Tarou something to do in the story.  He turns out to have an intimate connection to the evil werewolf and it gives Tarou something to do other than offer snark and advice from the sidelines.  Still, it all wraps up in a neat, tidy, and cozy manner.

I went into Three Wolves Mountain expecting something utterly bizzare.  What I got was instead something that was rather forced, badly paced, and too shallow to make its happy ending feel well-earned, and all of it with werewolves.

I've got to be frank: the werewolf designs here are kind of ridiculous.  Jiro's is basically the lupine version of a catgirl and when Tarou isn't in his normal, fully canine form he looks like a guy wearing a wolf mask.  There's an in-plot explanation for this (Jiro and Tarou are only half-lycanthrope), but mostly this is so Naono can dodge the whole bestiality angle.  Still, she could have done something to sell these guys to the reader as werewolves without drawing something so goofy!

Aside from these two, though, the character designs aren't bad.  They're not great by any means; they tend to be on the awkwardly long and lean side of things and she sometimes struggles with drawing hands and faces.  Still, she does a nice job with the shading and she draws clothes that actually move and drape like actual cloth.  She also does a great job at drawing actual wolves, and the same hatching she uses for shading helps to convey the texture of thick, fluffy fur.  Her grasp on the scenery is much shakier, though.  She seems to be more comfortable relying on screentones than on capturing the mountainous scenery where this is all meant to be set. Naono's not a completely wretched artist, but she needs to work on the basics and she needs to find a way to draw a sexy werewolf without making it look like bad cosplay.

I want to give Three Wolves Mountain some credit for sheer originality in its premise, but once you get beyond the werewolf angle all you have is a pretty mediocre story with some serious relationship and pacing issues along with some mostly ho-hum art.  It's just passable enough to not stink, but no one is going to mistake this one for an overlooked classic.

This book is published by Viz under their SuBLime imprint.  This book is currently in print and available as an e-book through sublimemanga.com.
Posted by Megan D at 6:00 PM