It's kind of surprising that we don't see more BL about politicians.  It's the perfect excuse for well-dressed men behaving badly behind the scenes.  Maybe Japanese politicians don't deal with as many sex scandals as ours do?  Anyway, today's review shows how well the two can mesh. 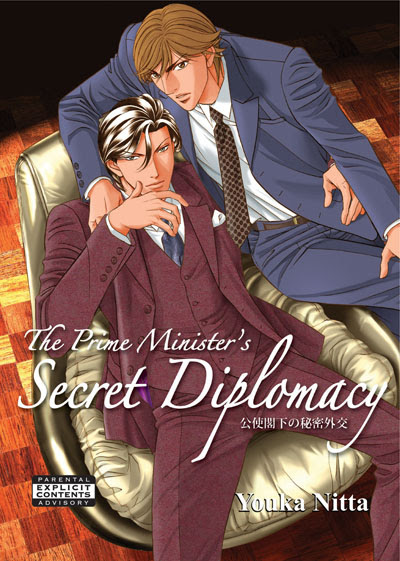 Thanks to his family connections, young Tomohiro Shiraishi finds himself working with Koushi Yoshinaga, a well-regarded minister of foreign affairs.  He catches Yoshinaga hitting on another man while out on the town, but in return for his silence Yoshinaga manipulates Shiraishi into sleeping with him.  It seems that Yoshinaga lives for thrills, be it the thrill of tense negotiations or the thrill of seduction, and he often finds ways to combine them both for his gain.  It's a quality that Shiraishi finds irresistible, and he finds himself torn between his desire to one-up Yoshinaga and his desire for the man himself.

Youka Nitta is a big name in BL, but she's also got a tendency to undermine the seriousness of her premises through ridiculous levels of melodrama.  Thank goodness that she restrained herself this time because it means that The Prime Minister's Secret Diplomacy works as both a dark romance and as a story about one man's cunning rise through the political ranks.

A lot of BL relationships are messed up in unintentional ways thanks to their strict adherence to the seme/uke dynamic.  That's not the case here with Shiraishi and Koushi.  Their relationship is purposefully messed up!  Koushi treats Shiraishi like he treats everyone else: as pawns for him to manipulate to his advantage.  Even those closest to him are still held at a distance and at any moment he's prepared to pit them against others for gain or to dump them as he sees fit.  He's an emotional sadist but he's so goddamn clever and nuanced about  it that like Shiraishi we can't help but admire it from afar.  It helps that Shiraishi isn't just another victim of his wiles.

Sure, he starts out as very prim and proper and he's thoroughly shocked at Koushi's behavior.  After his seduction, he feels guilt as his admiration of Koushi's political maneuvering runs up against his guilt for his growing desire and his betrayal of his sister (who also happens to be Koushi's fiancée).  Slowly but surely, he surrenders to his darker impulses and becomes a manipulator in his own right just so that he can remain at Koushi's side.  These are not the romantic figures that so many BL works present but instead two deeply flawed but fascinating men who use sex as just another tool in their own personal power struggle.  There will never be a happy ending for them both, but the tension (sexual and otherwise) is so glorious to behold that you never truly want it to end.

This tension is interwoven into their public lives, and in comparison to them the actual political drama is quite dry.  It's not like Koushi is negotiating any sort of major accord, but instead is engaged in juggling the happiness of other, mostly Western nations with Japan's need for a strong front on the international stage.  This is done mostly through extended conversations where every word choice and turn of conversation can carry great meaning, and it's only implied that Koushi also uses his body to keep select figures sweet.  Nitta's clearly done her research here and she captures both the polite formality and the subtle machinations of politics.  That being said, it doesn't smoulder with the same sort of tension found in Koushi and Shiraishi's personal conversations, and those seeking straight-up smut will likely come away disappointed in this book.  That's fine by me, as Nitta uses the few instances of sex here very well.  They are not mere fanservice but instead serve as actual plot points, the punctuation to the dramatic high points of the relationship.  Every instance has some degree of fallout afterwards that impacts the plot.  Nitta knew that anything else would simply be gratuitous and would otherwise ruin what is both a well-written political drama and a compelling tale of two men corrupted by their own needs.

Nitta has always been one of the best artists in BL, and that skill is put to full use here.  I've always liked her character designs.  They strike the right balance between masculine handsomeness and the sort of stylized beauty that BL so often demands.  She's also got a wonderful grasp on both body language and expression.  Their bodies look and move in a way that shows that Nitta knows how a man's body works and their faces perfect match the emotion of every scene.  She's very restrained when it comes to sensuality here.  It's not just that most of the sex scenes don't go on for very long, but it's also in how she mostly avoids showing genitalia and instead focuses on their hands, their faces, and the banter between Koushi and Shiraishi throughout.

That wouldn't mean much if she didn't know how to present it all, but the presentation and pages here are top-notch.  Nitta's backgrounds are lavish and lovingly rendered, allowing the reader to soak in the elegance of the high-class setting.  She shows them off often in her panels, but she's also very good at using visual angles or a well-timed close-up for dramatic effect or how to cut back and forth between points in a conversation without merely turning it into a parade of talking heads.  Even her composition is smooth, as the panels flow in a way that suggests an expression slowly shifting or switches to dramatic wedges during a revelation or shift in power.  Even the color artwork, here shown off on the covers both inside and out, shows off both her confident skill and her fondness for rich color choices.  It's a beautiful looking book from beginning to end, full of both the skill and nuance such a story deserves.

The Prime Minister's Secret Diplomacy is a masterwork that combines serious drama with a nuanced and complicated cast to craft a compelling story fueled by tension and passion in equal measure.  Best of all, it's supported by brilliant art made by a one of the genre's best and brightest.  It's one of Youka Nitta's best works and one that comes highly recommended.

This book was published by Digital Manga Publishing.  It is currently out of print.
Posted by Megan D at 2:32 PM