I've covered most of the notable BL publishers, but did you know that Yen Press dabbled in the genre at one point?  Well, you do now! 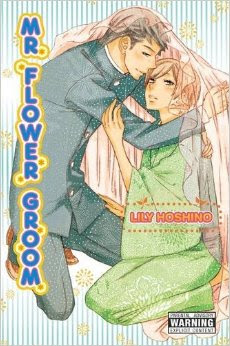 Souda family tradition dictates that their younger sons must marry other men from the same clan.  Kouichiro is no exception to this, having recently married his childhood friend Ritsu.  Of course, just because they are married doesn't mean that their relationship troubles are entirely over.  Between some cute classmates and a lot of misunderstandings, their newfound marriage will be put to the test!

Reviewing this one is a little tricky considering that it's meant to be a sequel to a book I have yet to read.  Still, it's not hard to get your bearings about Mr. Flower Groom as the premise is the only thing about it that stands out at all.

Our leading couple is horrendously dull.  There's very little to distinguish either Kouichiro or Ritsu as characters other than some vague uke and seme-ish qualities.  That's why Kouichiro is terse and Ritsu is kind of fussy.  If there's one quality they do share, it's a fondness for jealousy.  The two of them get bouts of it thanks to a former classmate (in Ritsu's case) or a close relative (in Kouichiro's case.  Also, ew.)  Of course, that jealously doesn't last for long and it's really only there to serve as an excuse for make-up sex at the end.  Worst of all, it's all handled in the most dull and lifeless way that this final coupling isn't the release after a lot of dramatic build-up but simply just something else that happens.

That's a big problem because there's nothing else here for them to do.  These characters are simply too young and too boring to have anything else going on in their lives beyond their gimmicky marriage.  That may be the reason why the rest of the volume has to be padded out with unrelated side stories.  If so, that may not be the best strategy because the side stories are more interesting than the main event.  The first of them, "Only You Would Know," is a fairly simple story of an abrasive high school kid named Shinoda getting together with a more popular kid named Koidara after losing his contacts.  It's not terribly original, but Shinoda's harshness gives his dialogue a bit of bite and the two treat their coupling more like a dare than anything else.  It's unusual, but it also means that this chapter has more appeal and smoulder to me than most BL can offer in a single volume.  The second story, "Omamorihito Hanana," is more of a typical star-crossed lovers sort of story, as a pair of teenagers trying to bring blessings upon their clans end up falling in love in the face of rules forbidding such a thing.  It's not quite as good, but it's another place for Hoshino to indulge her love of crossdressing and/or really feminine ukes, as the uke here spends most of his time in a very ceremonial and feminine kimono.

Maybe Mr. Flower Groom would have been more compelling if I had read its predecessor first.  Maybe I would be more invested in the leads as a couple.  As it is, there's simply nothing here to get invested in.  The cast and story alike are too dull and too rote to inspire any interest and Hoshino's low-key approach to the drama makes it even more boring.  We know Hoshino can do better because we can see it with at least one of the side stories here, so why can't she bring that same sense of verve to the rest of the volume?

I'm always of two minds about Hoshino's art.  On one hand, her character designs are appealing overall.  They have dark, glossy eyes that draw your own eyes to them on the page, and she's got a sort of visual austerity that stands out in a genre used to all sorts of visual excess.  That being said, her characters do tend to be kind of stiffly drawn, and her ukes are drawn in such a feminine manner that she might as well be drawing flat-chested girls.  Ritsu doesn't suffer from this nearly as bad as some of her other works, but it's always been something of an oddity of hers.  Her sparseness also applies to the backgrounds.  While what we do see of the Souta home is nicely rendered, she mostly gets around this with a lot of close-ups.  Even in the art, we don't get much escape from Kouichiro and Ritsu's barely simmered drama, and it only adds to the stifling boredom of their story.

I can't say how Mr. Flower Groom works as a sequel, but as a stand-alone book it's merely a sparsely-drawn snooze.  It's perfectly competent, but it doesn't exactly inspire me to seek out Hoshino's other books.

This book was published by Yen Press.  It is currently out of print.
Posted by Megan D at 12:55 PM