Yun Kouga isn't a mangaka who does a lot of straight-up BL, but she's well known for making moody yet uneven shonen-ai.  As this work demonstrates, it seems she's been doing so for decades. 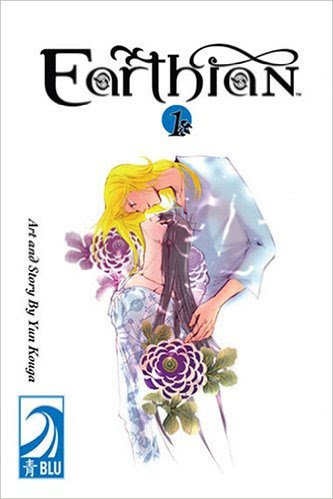 For eons, beings known as angels have watched over humanity and judged them for their accomplishments and their failures.  Amongst those observing humanity are Chihaya and Kagetsuya.  Chihaya believes in the goodness of humanity and is always searching for pluses to report to his superiors.  Kagetsuya is more skeptical of humans and always seems to find the downside to all of Chihaya's findings.  As time goes on, Chihaya's good nature begins to rub off on Kagetsuya and he finds himself drawn to the boy.  It also appears that these two were not paired together by chance, and that there are others observing and judging them as well.

Earthian was Kouga's professional debut and quite frankly it shows.  It's got an intriguing premise, but the quality of the stories is all over the place and she hasn't quite learned how to balance her heavenly morality tales with the politics of the angels.

If this manga wasn't influenced by Please Save My Earth, I would be shocked.  Both feature ancient yet beautiful alien races observing humanity from the moon who are themselves caught up in relationship drama.  It's just that instead of a straight love triangle, here we're dealing with some vaguely gay and mostly unspoken longing between out main pair, even as the threat of judgment from on high looms constantly over head.  On top of that, Kouga adds a ticking clock in the form of the angel's arbitrary quota of 10,000 pluses or minuses.  If they meet the former, humanity gets to live on in peace; if they meet the former, humanity is destroyed.   It's a rather arbitratry rule, which is why it's forgotten fairly often.  Kouga tends to do that a lot in this series, setting up rules only to sidestep them for dramatic convenience.  Black wings mean that an angel is evil!...unless it's sweet little Chihaya.  Humanity is doomed unless it meets the angels' standards!...but it's not a big priority, so take your time with your reports.  Show your wings to humans more than three times and you'll be demoted!...unless someone else shares their chances with you, whatever.  Homosexuality is forbidden amongst the angels!...except that the higher-ups are kind of gay themselves and are all but taking bets on Kagetsuya falling in love with Chihaya.

Maybe the forbidden romance element would be more compelling if Chihaya and Kagetsuya were themselves were more compelling.  Chihaya is little more than an old-school shoujo heroine without the boobs.  He's naïve beyond belief, and because of that he frequently wanders straight into danger without a thought.  Meanwhile, Kagetsuya is the tsun to Chihaya's dere.  He spends half of the series being a grump and extracting Chihaya from his trouble.  Thankfully he lightens up a little as the story goes on and he starts to doubt his anti-human stance, which means that the childish sniping between him and Chihaya decreases greatly.  It's still a very innocent sort or relationship, so don't expect anything more explicit than some longing looks and a lot of inner monologues wondering what these strange feelings might be.  It's so innocent that it barely qualifies as shonen-ai, an artifact of a much more innocent time in that genre's history.

Mind you, it's not all angelic drama, though.  This is also something of an episodic series as the angels find themselves entangled in the tragedies of humanity.  Some of them are (forgive the pun) more down to earth.  The first story in particular, where an idealistic astronaut dies during her mission, is particularly somber considering that Kouga wrote it not two years after the Challenger disaster.  Others are far more sensationalistic, like the priestess who wants revenge on her Triad family for killing her brother or the little esper girl on the run from evil scientists.  Others are simply melodramatic, like the one about the opera singer caught in a love triangle (while performing in Phantom of the Opera, no less!)  Meanwhile it will sometimes take a break to show the reader what's going on with the angels on the moon or the backstory between our leads.  This means that the tone of the story is all over the place.  I can understand Kouga struggling with this in the early chapters - lots of mangaka struggle with this when they start a new series.  The problem is that it keeps happening throughout the volume and that lack of focus leaves the story drifting in a sort of emotional and narrative limbo.  I can only hope that in the later volume she figures out whether she truly wants this to be a melodramatic anthology strung together by the involvement of our leads or whether it's a delicate, slow-paced, and star-crossed romance between them because she simply wasn't skilled enough to pull off both at the same time.

The artwork here is very pretty, if very typical of its time.  That means lots of tall, skinny bishonen with plenty of long flowing hair, giant shoulders, tiny heads, narrow hips, and all of it rendered in the most delicate fashion with flourishes of flowing cloth and feathery wings that wouldn't have looked out of place a decade previous.  Again, the influence of Please Save My Earth is obvious here, all the more so because it's clear that Kouga hadn't found an art style of her own yet.  If you compare this series and, say, Loveless, you see that not only did her art evolve with the times but that she found a style that was her own.  It was one that was more angular yet more confident and distinct than what you see here.  Still, the delicacy and androgyny of the art suits its mood most of the time and it has managed to age gracefully for the most part.

That same delicacy extends to the rest of the panels as well.  Backgrounds are fairly simple and rendered mostly in stark washes of black and white.  Panels tend to be framed rather sparsely and the composition is almost elegant in its simplicity.  Even the color pages tend to be rather delicate, as they are mostly done in soft shades of pink, yellows, blues and greens.  They manage to capture a certain delicate air without looking washed out.  Even the cover is quite pretty with a poses that evokes Art Nouveau on a heavy, textured pearlescent ivory base.  Its story may be flawed, but Earthian's art is rather timeless and hopelessly pretty.

Earthian suffers from wanting to go in too many directions at once, even if it always looks good while doing so.  I'm not quite sure I would call it a classic, but the glimmer of Kouga's early talents combined with the scarcity of translated manga from this decade make this series worth a look.

This series was published by Tokyopop under their Blu imprint.  This series is complete in Japan with 5 volumes available.  All five were published as a collection of four volumes and are currently out of print.