Sakira is an up-and-coming BL mangaka who got a boost overseas when DMP made a quartet of her works the focus of a Kickstarter campaign.  I contributed and was originally hoping to have the books in time to cover them for this month.  Alas, the release got delayed, but in the mean time I can check out a digital-only title of hers. 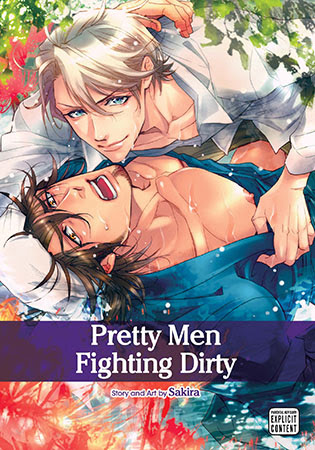 In this collection of stories, a mountain-dwelling potter learns to connect to both his art and his desires through the administrations of a rich eccentric on the run.  When the eccentric's brother tries to follow in his footsteps, he goes a little too native and requires a lot of up close and personal rehabilitation.  Finally, we follow the story of a man who finds himself the 'stepmother' to two very difficult young men who want to prove that they are just as dominant as their father.

Pretty Men Fighting Dirty is a collection that could more accurately be titled Buff Guys Acting Weirdly.  There's an energy to each story that I can appreciate, but they also tend to come with a lot of moments that leave me baffled, if not feeling worse.

Where this collection truly lost me was sadly during it's longest narrative, "A Loving Household."    It's all about Hikaru, a young femme gay man who not only manages to find love with a buff middle-aged divorcee named Tetsuji, but then has to learn how to be a mother figure to Tetsuji's two moody teenage sons.   It's a premise with potential for a lot of sweetness, right?  Well, any sweetness goes straight out the door when Hikaru meets Tetsuji in part by being kidnapped by a mad gay gigolo.  This is then compounded by the fact that father and sons make up by bonding over their mutual desire to molest their new 'mother' and they all become one big quasi-incestuous family. If the tonal whiplash in these stories were any more extreme, my neck would have snapped like celery.  A better writer might be able to put off the combination of lightheartedness and crazy hentai logic, but Sakira is simply not at that level.

Even the shortest stories suffer from this.  For every "Cosplay Bride," where a couple of friends-with-benefits comfort each other with sex after the end of an engagement, there's an "Unseen Love" where a pervy uncle manipulates his clueless teenage nephew into sex, or a "Let's Go To the Proctology Clinic!" where a man falls for his doctor during his treatment for hemorrhoids.  I certainly was never bored while reading this, but her choice of kinks and hard shifts into smut kept me from truly enjoying it.

I could totally get behind an artstyle like Sakira's.  She's part of a subgenre that's been dubbed 'gachi muchi.'  Literally that means 'muscley-chubby,' but in practice it means that most, if not all of the characters are well-toned, if not outright buff.  I am perfectly OK with this becoming a trend.  You can't really draw muscle-bound guys without having some working knowledge of how they look and move on a human body, so you don't get a lot of the horror-show anatomy that's become so common in BL.  It also makes all these guys look like actual MEN and not perfect anime-friendly bishonen, which personally makes them far more attractive to me than usual.  She also draws great faces, ones that  are open and lively and surprisingly varied.  She's also not shy about her smut.  She loves to show off the action from all angles, and she draws every wang and spurt in almost graphic detail.  Well...it would be graphic detail if not for the fact that she flippantly censors them with only a small strip or two of white bars.  This censors about as much as bandage on a boob, but it's more about obeying the letter of the law than the spirit.

It's a good thing that she has so many good qualities going for her because her tendency towards indulgence is easily her biggest sin.  Once she gets to the sex her paneling gets far sloppier.  She's determined to fit as much explicit action into each panel as possible and it all gets a bit chaotic after a while.  It's a shame because otherwise her pages are composed in a lively and engaging way.  Characters rise and stretch out of their panels.  She juxtaposes close-ups in a way that simulates the back-and-forth of a conversation or form a cascade of increasingly tight reactions.  Angles switch with abandon, and she's good enough at perspective that her characters look fine at all of them.  The only thing that really suffers are her backgrounds, but there's so much stuff going on up front that it's hardly missed.

Pretty Men Fighting Dirty is not a collection for the romantics.  No, it's for the BL fans who want some high-energy, well-drawn, well-muscled, and raunchy smut and are willing to ride out the weird plot twists to get it.

This book is published by Viz under their SuBLime imprint.  It is currently in print as an ebook through SuBLime's website.
Posted by Megan D at 1:44 PM