Of course, for every good or mildly interesting BL book in print, there are easily half a dozen books like today's offering: some boring, forgettable piece of crap with an equally boring and vague title. 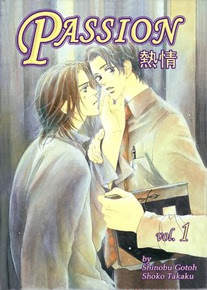 Our story starts out with our leading man, Hikaru, in the middle of some afternoon delight in an empty classroom.  His partner is Shima, his homeroom teacher.  They've been having an affair for some time.  Hikaru struggles with this as he's prone to emotional outbursts in the first place and frequently declares his love to Shima.  Shima is mostly indifferent, content to play things casually until Hikaru graduates.  This leaves Hikaru frustrated to the point where he tries to read into Shima's every word and gesture for signs of affection.  Things only get worse when Shima's ex is hired on as a new teacher, and he's determined to get his man back by any means necessary.

...huh?  What?  I'm sorry, I must have dozed off there for a bit.  I can hardly be blamed, though, when confronted with such a tiresome premise.  The teacher/student angle is nothing new, the dynamic between the leads is horrendously dysfunctional, and the emotional beats are constantly forced.

For the most part Hikaru is no different from any other uke, but he's burdened with a ridiculous amount of desperation.  He loves Shima for no good reason and he's so desperate that he'll try to spin the smallest gesture into proof of affection.  In the hands of a better writer, this could be genuinely tragic.  In Gotoh's hands, though, it just makes Hikaru look pathetic to the point of disgust.  It's also hard to see just what Hikaru sees in Shima in the first place.  Shima's only defining characteristic is an aloof sort of douchiness.  He's clearly toying with Hikaru to fill the time and he hasn't the slightest concern for the boy's feelings.  He also has no concern for professional ethics, which is why he has no issue whatsoever with sleeping with one of his students.  Finally there's Amamiya, and all there is to say about him is that he has a candy shell of joviality concealing a desperate and rapey center.

With characters like these, it was impossible for me to give the slightest damn about the plot.  It's nothing more than Hikaru desperately lashing out for affection and Shima shutting him down, interspersed with the odd bit of sex.  Even with Amamiya's addition, all that promises to add some non-statutory rape.  With something this dull and forced, you can see how this book would bore me so badly, right?

The artwork is no more interesting than the story it illustrates.  Everyone is as generic as you can get in BL.  That means every is long, lanky, flatly drawn, and they all pretty much have the same face.  At least most of them can emote, save for Shima.  Because he is a stereotypical seme, he's determined to retain a look of perpetual boredom.  Even in the middle of sex, he looks like he couldn't care less.  I guess that doesn't say much for Hikaru's skills as a lover.  Even the backgrounds are sparse and flat as can be.  Shoko Takaka either doesn't care about her art or is just that thoroughly bad at it.

This book came out very early in DMP's history, and it's clear that they weren't entirely discerning when it came to translators.  It's kind of awkward to read and there are more than a few typos as well.  It's so notable that it's explicitly mentioned in the series' Wikipedia page.

Passion couldn't be more misnamed if it tried.  There isn't the slightest bit of it to be found within its pages.  It's not in the story, the cast, or the art.  Now if you'll excuse me, I'm going to go back to -

This series was published by Digital Manga Publishing.  This series is complete in Japan with 4 volumes available.  All 4 have been published and all are currently out of print.
Posted by Megan D at 11:57 AM