So do you remember Chobits? Did you ever wonder what a BL version of that might look like, particularly if you took out all the good parts?  Well do I have a manga for you! 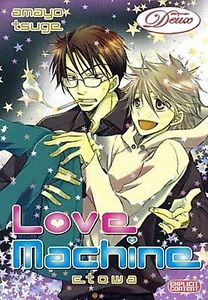 Kokuyo is a cranky, reclusive author whose grueling schedule has often landed him in the hospital.  His friend Saeki tries to help him by giving a 'replicant' named Shiro, an android that will take care of his chores and keep an eye on his health.  Kokuyu initially resents Shiro's presence, but after a while he finds himself caring for Shiro.  Kokuyo finds himself wondering if it's possible to love an artificial being?  Is it possible that Shiro could be capable of returning them as well?

So this is neither the first or the last work to ponder the possibility of falling in love with a robot.  Hell, it's not even the first manga to go there.  So what makes this one any different?  Well, I guess it's distinguished mostly by its ineptitude and its inability or unwillingness to explore the problems with a human/robot romance.

The relationship between Kokuyu and Shiro doesn't so much progress as it does jump from one bullet point to the next.  The two of them are such extremes that it should take some time for Shiro's gentility to wear Kokuyu's grumpiness and win him over.  Tsuge doesn't want to bother with that, though.  All it takes to win Kokuyu over is a simple robot health crisis, and he almost instantly interprets that affection as love.  At least Shiro's change in feelings are explained slightly better, as he interacts with similar androids who have themselves learned to love.  The story also implies that this breaks their brains to the point where they start to lose their memories, but who cares!  It sets enough precedent for him to jump to that conclusion that he must love his master and that they must have sex to demonstrate it.  It's a good thing that he's fully functional and anatomically correct, or else the story wouldn't be able to shove in any sort of sex!  You can't simply jump from plot point to plot point as drastically as Tsuge does here.  Even if the reasoning is bad or weak, you still need some sort of transition or explanation to justify such extreme turns in such extreme (and quite frankly shallow) characters.

This is bad enough, but there's also all sorts of problems with a relationship between a human and an android that she doesn't even bother to bring up, much less address.  Say what you will about works like Chobits or Absolute Boyfriend, but they do at least address some of the issues that come with such a relationship.  They suggest that substituting an artificial lover for one of flesh and blood is not entirely healthy, that those who do so may have to make some serious sacrifices, and the question of just how much these feelings are due to programming and how much is due to some sort of free will.  They might not always stick with those ideas, but they consider them long enough to stick with the reader.  Then there's Love Machine, which doesn't even let such things cross its mind for a moment.  Nope, Kokuyu loves Shiro and Shiro loves him and that's enough for everyone!  What's really strange is that Tsuge does kind of address it in the second half.  There she focuses on Seiki and his own support android.  He's far more friendly, so with him it's not so much about the robot reforming the man so much as it is about him coming to regard his android like a sentient being.  His falling in love is handled with more sensitivity and more gravity than the previous one.  It should also be noted that when his bosses suggest turning these androids into sexbots, he's horrified at the notion.  At least he he knows exploitation when he sees it.  Honestly, I wondered why this guy wasn't the protagonist.

Tsuge's not much better at sequential art than she is at storytelling.  Her characters are flatly drawn and her faces are not only almost always the same, but very stiff and occasionally just plain weird-looking.  I'd complain that Shiro and all his fellow androids look the same, but as androids made in the same line this actually makes some sense.  She's clearly got a preference for pairing up her older semes with ukes that look so tiny and boy-like that it becomes kind of creepy.  Even the high school vampire one suffers from this.  Her panels and pages don't look bad, but the backgrounds are just as flat as the characters themselves and the panels lack any sort of real imagination or beauty to them.  It's just a mundane looking book with a few odd and awkward spots here and there.

Love Machine has a good premise that's utterly wasted on this mangaka.  She doesn't have the writing chops to give the story the sort of depth it needs and her artwork lacks both the skill and the charm it would take to overcome her poor writing.

This book was published by Aurora Publishing.  It is currently out of print.