Review: THE VISION OF ESCAFLOWNE

It's November, which means it's time once more for me to review some robot-centric manga.  While I may have exhausted all of the Evangelion and (most of the) Gundam manga out there in English, that doesn't mean that there isn't plenty of other notable mecha-related titles for me to talk about. 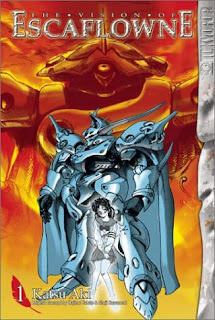 Hitomi wants nothing more than for her sempai Amano to notice her.  Alas, even with her skill for divination she can't find an answer to her romantic prayers (much less for the weird dreams she's been having).  During one of her divination attempts, Hitomi is whisked away to a fantastical world where medieval-style kingdoms are locked in a fierce war fought with giant mech suits.

Hitomi ends up tagging along with the brusque Prince Vaan, who is seeking revenge for his destroyed kingdom and to rescue his mother from the villainous Dilandau.  Vaan discovers that Hitomi herself might be the key to unlocking the full potential of his own mech, and that the two will have to work together if either of them wishes to go home again.

These days The Vision of Escaflowne is a beloved classic, so it's easy to forget that it almost never got made.  It began as an idea in the early 1990s by Macross creator Shojo Kawamori, who wanted to make a show centered on divination.  It was initially designed to be a more hot-blooded shonen mecha series, helmed by Yasuhiro Imagawa.  The project fell into production hell after Imagawa departed to work on Giant Robo and G-Gundam and Kawamori went off to work on more Macross, and it wouldn't get back on track until a few years later when Kazuki Akane took over and drastically revamped it.

During those lost years, though, that original concept for the show (credited to Kawamori and "Hajime Yatate," the collective pseudonym used by staff writers at Sunrise) was given to Katsu Aki to adapt into this very manga.  If this manga is anything to go by, we should be thankful this version of Escaflowne was never animated because it was a lot more cliched and a lot less interesting than the version we got.

It was so hard for me to not compare and contrast every little thing with the anime because the manga always came off worse in the comparison.  This version of Hitomi is still a gifted seer and full of uncertainty, but she's also much weepier and she's basically dragged along the whole time by Vaan.  This version of Vaan is still angry and frustrated over the loss of his kingdom and family, but here it's hard to find a point where he isn't yelling at Hitomi or being sarcastic towards others.  It's certainly not helped by the rather loose and liberal translation that gives Vaan an edgier, more modern voice than he should have.  Dilandau is no longer a psychotic teen but a grown man who looks suspiciously like Prince who is obsessed with Vaan's mother.  Oh, did I mention that Vaan's mom is still alive in this version?  And that she's not some sort of winged magical being but instead just a helpless damsel?  Everyone seems to have been made more shallow, more extreme, or more annoying...with the curious exception of Allen Schezar, the princely wandering knight who just so happens to resemble Hitomi's beloved Amano.  I suspect that even if a reader was not familiar with their anime counterparts, they would still struggle to find this cast of characters likeable or interesting enough to follow.

Much of the plot beats remain the same here, but they are presented in such a manner as to make them more confusing than it needs to be.  We know that the kingdoms of Fanel and Zaiboch are fighting, but are never told why it happened in the first place.  There's no attempt to explain how or why there are giant mechanical suits of armor beyond "magic."  This is one of those rare times where a bit of info dumping would be welcome, as it would not only alleviate the confusion but allow the story to slow down for a bit.

There is one bit of magic that is explained, though, and it's one original to this version of the story.  It turns out that instead of using a magical dragon heart stone to power the Escaflowne, it is Hitomi herself that serves as its power source.  Here she physically bonds with the suit in the most shonen way possible, a bond that transforms her from a mousy brunette to a stacked, skimpily-clad blonde while redundantly announcing every little thing that the Escaflowne does.  That's Aki's idea of making Hitomi more proactive.  It's just one of many bad ideas in this version of the story, ideas that might have been given a pass when it first debuted but ones that simply do not once you have the final, refined version of Escaflowne to compare it to.

Aki's art is some of the most aggressively 1990s manga art I've seen in all my years as a manga reviewer.  The characters are short and squat with enormous, overly detailed hair (and eyes and cheekbones to match).  The costumes are both too vague and too over-designed for their own good, generic fantasy fare with lots of frills, poofs, and leg-of-mutton sleeves.  The only exception to this is Hitomi, who loses her school uniform in the process of getting transported to this world and thus spends most of her time in what looks like aerobics wear.  The expressions are broad but the backgrounds are minimal, a failing for a fantasy setting that needs to establish its exotic nature and the scale of the battles within it.

At least Aki doesn't completely screw up up the Escaflowne and the other mechs, although they seem a bit more squashed in their proportions and a little less obviously like large suits of armor.  Sadly, every fight between them is horrendously stiff.  Aki relies entirely on speedlines to communicate any sense of speed or motion, which only serves to obscure the very action he tries to portray.  This is just a profoundly ugly, tacky piece of work.

Is this a vision?  Or perhaps a dream?  No, it's merely an ugly, dated, cliched interpretation of how Escaflowne might have looked in a different timeline.  Thank goodness this version has been mercifully forgotten for the true vision of Escaflowne.

This series was published by Tokyopop.  This series is complete in Japan with 8 volumes available.  All 8 were published and are currently out of print.