Getter Robo is one of the defining works of mecha manga, but none of Ken Ishikawa's original series nor its many sequels have been released in English.  The closest thing we have is this series, but is it enough to scratch that particular itch?

GETTER ROBO DEVOLUTION: THE LAST 3 MINUTES OF THE UNIVERSE (Getta Robo DEVOLUTION: Uchu Saigo no 3-bunkan), written by Eiichi Shimizu with art by Tomohiro Shimoguichi, based on the original story by Go Nagai and Ken Ishikawa.  First published in 2015 and first published in North America in 2018. 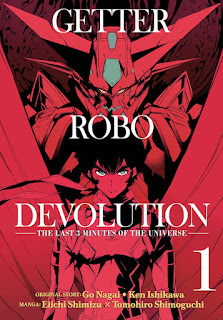 Ryoma Nagare's life is one that has been haunted by tragedy.  No sooner do his parents die than his classroom (and classmates) explode in a mysterious attack.  Soon afterwards he's contacted by Dr. Saotome, along with fellow teens Jin Hayate and Musashi Tomoe.  They have been brought together because they possess the ability to manipulate a mysterious robot, which they use in turn to combat equally mysterious, massive creatures known only as the Devolved.

How do you adapt a big, bombastic, convoluted series like Getter Robo for modern audiences?  According to Eiichi Shimizu, the answer is "make it realistic, but also edgy as fuck."

I can't say that my first impression was a very good one.  The level of tragedy that is heaped onto Ryouma in that first chapter verges upon ludicrousness.  It's not enough for his parents to seemingly die from suicide, he has to endure bullying, save a kindly classmate from attempted rape, only to get expelled and watch her (and every other kid in the class) explode in front of his eyes shortly thereafter.  It all happens so fast that any pathos it could generate is lost.  That's not even taking into consideration how the only girl we see is there entirely to get fridged and push Ryoma over the edge.  Thankfully the introductions for Ryoma's future teammates, Jin and Musashi, are not quite so extreme.

Even then, the climax of the volume is not the point where they meet, but just getting Ryoma into the robot (which seems to go against the concept of Getter Robo, if you ask me).  He fights a kaiju that owes a lot of debt to Evangelion (in that it looks like a weird mash-up of the Evangelion units and some of the Angels all at once).  Even then, I feel like Shimizu is strong-arming the reader forward, not unlike how Dr Saotome is all but strong-arming Ryoma into joining his team.  I also hope that all this emphasis on Ryoma eases up so that we can learn more about Jin and Musashi beyond them being The Other Guys.

Shimoguchi's artstyle is much more smeary and sketchy than Ishikawa's original artwork, but I do think it's effective.  It definitely brings a more down-to-earth approach to Ishikawa's original character designs, which were much more simple and goony (as was the style at the time).  For the most part, the only callbacks you can find to Iskikawa are Ryoma's pointy sideburns and the spiral eyes that the boys get at their most intense moments.  That naturalism does work well with the interpersonal drama, though, to the point that it's easy to forget that this is a mecha manga at times.

I can't say I'm entirely fond of his take on the title robot itself.  It's hard to see much of the Getter's classic outline because much of it is buried under thick armor.  I guess it fits well visually with the equally angular and alien take on the Devolved monster, but it doesn't look particularly awesome and won't give those familiar with the franchise that buzz of familiarity.

Getter Robo Devolution seems to be going through its own evolutionary struggle, as it tries to find its own unique take on a long-standing franchise.  I just hope that in the process it slows down and tones down the edginess a little.