I thought that reading a vampire manga by a more modern horror mangaka would be a good plan, but after reading this one I'm not entirely sure... 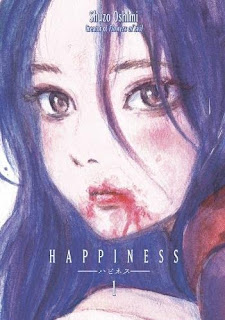 Makoto Okazaki is just another quiet, bullied, sexually frustrated high school boy.  Then he's attacked by a strange girl who bites him, drinks his blood, and asks if he wants to die or be like her.  When he wakes up, he finds himself changed.  He's stronger than before, able to break his bully's nose in a single punch, but can't tolerate bright light.  He's can't tolerate food, but the mere whiff of blood sends his mind reeling, inadvertently bringing closer to girls than ever.  Makoto doesn't understand what's happening to him or just what he's becoming...

Honestly, it was almost inevitable that Oshimi would try his hand at vampires.  After dabbling in everything from existential horror to straight up murder, it's something that's absolutely up his alley.  True to form, his take on vampirism strips all the glamour away from it.  The vampire that turns Makoto is basically feral, and when Makoto's powers are at their strongest he too enters a more instinctive, animal mode (even if he tries to fight it as much as he can).  There's nothing sexy or Byronic about Happiness, just one boy haplessly fighting his slow transformation into a monster.

That being said, after reading a few Oshimi books I've started to notice some trends in his stories.  He's definitely a believer in the concept of the monstrous female.  Oh sure, some of them are merely antagonistic versus literally dangerous, but they always treated as these inscrutable, mercurial creatures.  Their role is to sweep up the protagonist (who is almost always a dweeby, downtrodden, mildly horny teen boy) into a maelstrom of emotion and strange sexual enticement.  That's certainly true here - Makoto's attacker is more literally monstrous than ever, and you can even see facets of this reflected in the girls around him who try to make friends with him after his transformation.  I'm not here to tell you that Oshimi is some sort of he-man woman-hating misogynist, but when something like comes up so often it's hard to not be concerned that he's doing more than just repeating himself.

The art here is about what you would expect from Oshimi by this point.  It's very down to earth in its look and tone.  Where it really shines are in the sequences where Makoto's growing power and hunger overwhelms him.  When the hunger for blood strikes and Makoto's vision starts to swim, Oshimi plunks the reader right into the middle of it.  The perspective shifts to first-person as the very page seems to swirl and contort, interspersed with close-ups of Makoto's panting face.  In those moments, the horror of Makoto's situation is vividly conveyed.

Happiness is at its best when it tries to visualize the terror and confusion of a vampiric transformation against one's will, but it's hard to shake the feeling that from this point onward Oshimi was starting to rely on a story formula that was starting to get a little repetitious and questionable in its gender politics.