Ok, so that last one wasn't quite what I was looking for.  Maybe I could try a manga combining vampires and crime fiction? 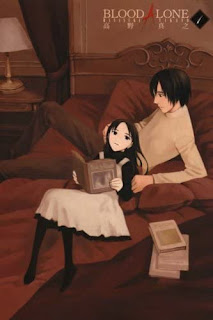 Misaki seems like a sweet, polite girl.  Her partner, Kuroe, is much the same.  You'd never guess that sweet little girl was a vampire or that Kuroe is the survivor of a vampire attack.  You'd certainly never expect these two to be part-time investigators who use their connections and powers to solve the crimes that are beyond the capability of the police.

Whenever I see a manga about a vampire girl and an older guy hanging around them, I reflexively wince.  More often than not, these sorts of stories are an excuse for creepy loli fanservice.  Thankfully, Blood Alone is not terribly concerned with romance.  If anything, it's more of a vampire police procedural, which at the very least is pretty unique.

Takano eases the reader into the supernatural conceit in much the same way one might ease themselves into a hot bath.  The book starts off slowly with a lot of everyday conversation between our leads before he drops the vampiric bombshell.  It's not until the next chapter that we learn about their involvement with the police department, along with a bit more information about how vampire powers work in this world.  Modern light novel writers would do well to learn from Takano's example when it comes to world-building.  Blood Alone doesn't have info dumps so much as it has info dribbles and that's how it should be.

The relationship between Misaki and Kuroe is not completely platonic, but is mercifully chaste.  Misaki's clearly very sweet on Kuroe, but she refuses to use her powers to make him her thrall.  Meanwhile, Kuroe's feelings are more ambiguous, but a smart reader can reasonably infer that he sees her as something of a replacement for his dead sister.  While the last couple of chapters maybe lean a little too hard on the quasi-romantic tension, their partnership is written in a way that reads as very natural and casual.  The mystery element is also quite solidly written.  Their first case involves the soul of a serial killer that likes to hop from body to body.  There's a lot of narrative twists and turns, and the ending is suitably ironic.  Overall it's a well-balanced introduction in both tone and content, and that makes it very satisfying to read.

The art is quite well-done, with a degree of restraint that makes for a good match for the story.  Everything here is very down to earth, from the character designs to the backgrounds.  The only time that Takano lets loose is in the last two chapters.  That's when they let lose with a number of shojo-style montages, with images of Misaki layered one over the other.

My copy was from Infinity Studio's initial stab at this series, and I have to wonder how many of them survived the decade if they were in the same state as my book.  The binding on it was so loose that the book itself was practically detached from the cover and multiple pages were falling out.  I would have to hope that Seven Seas's later reprint was much more sturdily built.

Blood Alone manages not only to handle a vampiric age-gap relationship well without making it gross but also combining with some well-written mysteries to boot.  If you're looking for a more relatable take on vampires in manga, this might be worth seeking out.