Once again, it's February, which means that it's time for another round of bad romance manga, a celebration of all the ways that love can turn strange and wrong.  We're starting off with a doozy of a work thanks to one of BL's most notable creators. 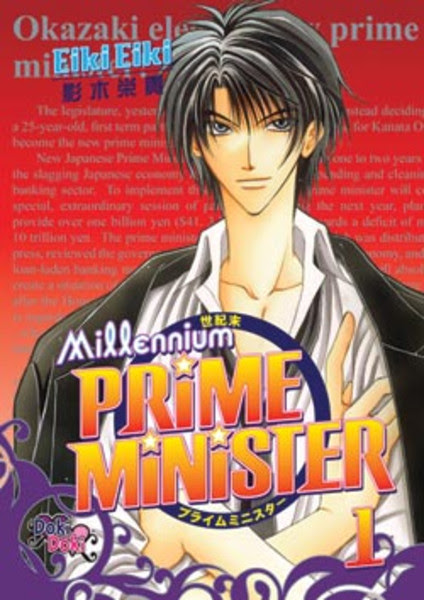 It all started at the local arcade.  Minori only meant to skip class for a bit to play some video games.  She couldn't resist the challenge of some mystery champion beating all the regulars.  She certainly didn't expect that same person to be some weirdo who sweeps her off her feet and promises to meet her.  Minori was more than ready to move on from that bit of weirdness, but then she discover that this same weirdo is Kanata Okazaki, the newly elected 25-year-old Prime Minister of Japan.  Now Kanata has whisked his newfound and deeply reluctant fiancée to his palatial home, and Minori must deal with both Kanata's staff and the changing nature of her feelings for Kanata.

I was mildly curious about this series because of its creator.  Eiki Eiki is something of a big name in the world of BL, but her solo works have something of a reputation for being jealous and rapey.  That is saying something considering how common jealousy-fueled rape is in BL to begin with.  I wondered if shifting to straight up shoujo would force her to restrain herself a little or let her explore something new and different.  Alas, my hope was for naught.

It's not often that I get truly and thoroughly skeeved out by a single volume of manga, but Millennium Prime Minister managed to achieve just that.  My sympathies were with Minori the entire time.  That's not because she was a well-written character, it's simply because she's gotten herself entangled with an epic creep through no fault of her own.  Their whole relationship is predicated on manipulation and stalking, as Kanata goes so far as to hunt her down after school after their initial encounter.  He not only uses his influence and wealth to dazzle Minori's parents into accepting his proposal, but also uses his friend/professional photojournalist to turn the whole thing into a minor scandal.  Kanata in turn uses this public shaming to force Minori's hand on the matter in front of an entire press room.  It doesn't help that everyone around Minori - her friends, her family, her classmates, Kanata's staff - all willingly forgive his transgressions because Kanata is just soooooo handsome and sooooo amazing and how this is all sooooo romantic!  It's just like Cinderella!  Yes, because nothing is more romantic than forcing a minor to marry a guy nearly a decade older than her.  Truly this is the height of romance and not the actions of a psychopath!

When he isn't actively manipulating Minori or others to get his way, Kanata is frustratingly vague about himself.  How the hell did a 25 year old who only recently entered the Diet manage to become Prime Minister?  Why is Kanata so desperate to get married?  Why did he pick Minori, of all people, to marry?  On the first two matters Kanata (and the story at large) is completely silent, and the last one he only answers with a glib "because I love you."  This empty statement is treated as reason enough for Minori's heart to start racing and set her mind a-whirl, but these and similarly 'romantic' moments between the two are so forced and out of nowhere that it's positively laughable.  Minori has every right to be angry at this jackass who has upended her life based and forced her into a relationship that she's simply too young to make and never desired in the first place.  She has every right to be angry when he keeps trying to force intimacy on her.  Thankfully he never resorts to rape, but he's fond of forcing kisses and is so fond of touching, smelling, and playing with her hair that I start to wonder if it's not Kanata's fetish.  The story tries to play this as a taming of the shrew, but it's more like a demonstration of how to force someone into Stockholm Syndrome.

It's very telling that there's very little to define Minori or Kanata outside of their relationship.  We learn practically nothing about Minori other than she's a bad student with a keen temper.  As for Kanata, there are hints of a tragic backstory, but the most we learn about him is that he's impulsive and very loyal to his friends, to the point where he's appointed them all as his personal staff.  You certainly don't get any sense of Kanata possessing any extraordinary level of charisma or intelligence, no matter how often the story keeps disposable side characters to rant and rave about his amazing political acumen.   Kanata's positive feels far more informed by the author than anything else.  Still, that's far more detail than any of Kanata's friends get.  They are mostly friendly, but they serve more as plot devices than anything else.  The closest we get to an exception is Sai, Kanata's personal secretary.  He spends two-thirds of the story being far more surly and pissy than someone reputed as a supergenius should be.  Then we discover that the cause of his surliness is the fact that he's in love with Kanata too, so in the end he's little more than another plot device on top of being a bone for Eiki Eiki to throw at her BL-loving fandom.

It seems that Millennium Prime Minister is proof that Eiki Eiki approaches straight romance in pretty much the same way that she approaches gay ones.  It's hollow, manipulative, and downright disturbing in places, yet the author presumes that we'll just gloss over the bad or weird parts because of LOVE.  Were this more fleshed-out or more self-aware, it could be a guilty pleasure.  As it stands, though, it's merely just guilty.

Eiki Eiki's artstyle is distinct, but the artwork here is also very much of its time (that time being the late 1990s).  There are lots of prominent cheekbones, mop-like hairdos, and I can't help but feel like these guys mostly look like rejects from Gravitation.  The character designs certainly give away her background in BL, as they bear all the strange bits of anatomy that are so common there.  That means every guy has linebacker shoulders, giraffe-like necks, and giant spidery hands.  That means their fines suits hang off of them like clumsy clothes hangers.  The only thing I do like about the character designs are the cat-like eyes, which is something of a signature for Eiki Eiki.  It lends them an exotic touch but is subtle enough to not be distracting.  Still, that's more effort than she puts into the backgrounds, which mostly consist of grainy screentones.  It also keeps the panels from getting too cluttered.  Ultimately, the artwork gets the job done for the most part but the characters are just a little too gangly and weird for modern tastes and the rest of it doesn't compensate for them.

Millennium Prime Minister is spine-chilling in all the wrong ways.  It's built around hollow characters caught in a terrible, disturbing romance and I couldn't get it away from me soon enough.  This series is best left in the last millennium where it belongs.

This series was published by Digital Manga Publishing.  This series is complete in Japan with 4 volumes available.  All 4 volumes were published and are currently out of print.
Posted by Megan D at 6:00 PM