It's hard to find a boys' love manga that stood out enough to work for this month.  After all, we're dealing with a genre where rape is so common that it's a trope.  Thus, it takes a lot more for your given yaoi series to stand out as particularly egregious.  I did manage to find one, though, and it distinguishes itself by crossing one of the last few taboos left in manga: incest. 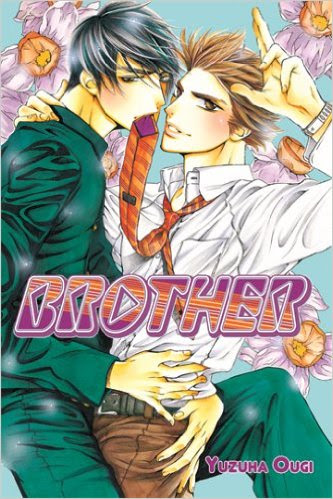 Asuka Momoki should have it all: a loving family, a good job, good looks, and an insanely popular and talented stepbrother named Yui.  For Asuka, though, Yui is the biggest problem in his life.  The two grew apart as they grew older, and an awkward encounter between the two has left Asuka impotent ever since.  Things come to a head between the two when they are trapped in an abandoned building and the feelings that the both of them have been repressing are finally unleashed.  These two distant stepsiblings are about to get much, MUCH closer.

Brother doesn't really cover any new ground as far as boys' love go.  Literally the only notable thing about it is that the pairing is incestuous.  It tries to justify itself with a lot of melodramatic nonsense and the usual "they're not REALLY related" clause, but it's not enough to save this series from the trash pile.

If you had to sum up Asuka and Yui's relationship in a word, it would be 'obsessive.'  Yui is driven by his sexual obsession with Asuka, and Asuka in turn obsessed with earning Yui's approval and Yui's own popularity with others.  Things only get more obsessive once the two start screwing, as Asuka's obsession becomes all-consuming and he tries to keep Yui close though near-constant bouts of sex.  I'm used to BL trading in very jealous and obsessive forms of love, but these two take it to extremes even before you factor in the incest angle.  Even after the two become a couple, they have to keep reaffirming their love through pointless trips and highly convoluted excuses to endanger one or both of them.  It's like all the two have in common is sex and their last names.

As noted before, the story shrugs off any criticism of its pairing as these sorts of stories always do: 'they're not related by blood, therefore it's OK!"  That doesn't fly when you consider that these two have been raised together since they were in grade school.  What's really weird is that the story never makes a big deal out of the incest. You would think that a couple this intense would spend a lot of time agonizing melodramatically about the conflict between conventional morality and their desires, but Asuka and Yui hardly even bat an eye at the matter.  All it takes is an awkwardly timed boner and some desperate gropings inside a crumbling cement box to overcome any objections the two might have had.

Like a lot of bad manga, what little we do know about Asuka and Yui is told, not shown.  We're told that Asuka is a great businessman.  We're told that Yui is a great tennis player and super popular.  Ok, I take back that last point if simply because the story make a running gag out of the fact that seemingly EVERY SINGLE GIRL within his vicinity can't help but comment on how dreamy Yui is to them.  That's about as deep as it gets, though.  With these two, it's all surface and no depth.  These two barely register as characters, and because of that any conflict over their family connection or burning passion falls completely flat.  For a story that's meant to be scandalous and melodramatic, Brother is shockingly dull, and that may be its most fatal flaw.

The only thing in Brother that is more offensive than the incest is the artwork.  Practically everything you could get wrong in BL art is here:  orangutan arms, giant spidery hands, narrow horse faces that look like bug-eyed, giant lipped caricatures of bishonen, giraffe necks, and an overall sort of wiriness to them that makes Asuka and Yui absolutely hideous to behold.  It's pretty easy to see where Ougi's true priorties were, as the only part of the boys that is competently drawn is their penises.  We get to take a good, steamy look at them too as the sex scenes are surprisingly uncensored.  She also tends to transition to them at lightning speed.  At any moment, the two can go from yelling fits to boner time, and this is done so frequently that it's almost laughable.  Ougi clearly couldn't be bothered to wrap up most of her plot points like a normal writer, choosing instead to distract her reader with lots of clumsy-drawn, sticky sex scenes.  Hell, she could barely be bothered to draw anything else in her panels.  Brother is simultaneously a very bad and a very boring manga to look at.

Brother is the bottom of the barrel when it comes to BL, and quite frankly that's where it belongs.  It's ugly, creepy, and hasn't the least bit of personality to its bland name.

This book was published by DramaQueen.  This series is complete in Japan with 2 volumes available.  One volume was published and is currently out of print..
Posted by Megan D at 10:13 PM