This month I'll be attending two different anime conventions, so I figured that the blog might as well get into the same spirit by reviewing some otaku-centric manga.  That being said, maybe I should have started with something a little more original than this one. 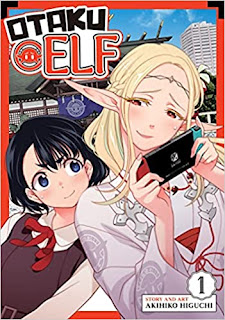 For generations, Koito's family have been the keepers of the Takamimi Shrine, home of the ageless goddess.  That goddess is in truth Elda, a elf who was transported to Japan over 400 years ago.  She's a hopeless otaku who would rather stay in all day playing games, eating snacks, and chugging energy drinks than perform her "godly" duties (much to Koito's eternal annoyance).  Bit by bit, Koito tries to convince Elda to venture out into the world, if simply to enjoy some new meals and meet the adoring folks of the neighborhood.

Otaku Elf reminds me of nothing so much as Himouto! Umaru-Chan.  A lot of that has to do with the similarities between the titular characters.  Like Umaru, Elda has an elegant appearance in public that  belies the fact that she's obsessed with junk food, toys, and video games.  She spends most of her days (and most of the temple's donations) on indulging her appetites.

The big difference is that instead of being a part-time gremlin, Elda is a shut-in who pretty much has to be bribed and badgered into going outside and doing her divine duties.  It's unclear how much of this is due to her being uncomfortable with the passage of time outside and how much of it is because people sometimes make fun of her ears, but the end result is still obnoxious instead of relatable.  The only mildly interesting thing to come out of it is a running gag about Elda being friends with Tokugawa Ieyasu.

God knows that Higuichi tries to counter all this nonsense with Koito.  There is at least an attempt to make her more than just the butt of the joke.  She's got dream of living a glamorous city life (even if the most she can do right now is an overly fancy purse), and she takes a lot of pride in her family's legacy, her neighborhood, and her job as shrine maiden.  I only wish there was a better balance between this and scenes where Koito and Elda argue about monjayaki because then Otaku Elf might be more than just a justification for a lot of lazy otaku jokes.

Higuichi's art is fine in a perfectly unremarkable way.  Most of the character designs are cute, albeit in ways you haven't seen at least a few times before.  Elda looks like every other elf in anime and manga has since the days of Deedlit: tall, blonde, pretty in an ethereal way...at least, until she starts acting childish or petulant.  Most of the comedy (such as it is) relies a lot on Elda and Koito making goony faces, but the face game here isn't quite good enough to overcome the lack of actual punchlines.

For all the fuss Koito and others make about it, we don't see much of the temple here, and what we do see is not terribly old, unique or interesting.  The same is true for the city blocks around it, which are mostly anonymous office blocks with the odd first-floor shop thrown in.  This apparently takes some inspiration from real locations, so why now draw upon that (literally and figuratively) for some actual inspiration?

Otaku Elf is as uninspired as its translated title, ignoring any potential its cast or setting might have in order to make lazy jokes about gatcha toys and VR headsets.  Like Elda herself, it's for the best if you just shut this one away and leave it to its own devices.