It's not like manga that are all about glorifying otaku and Akihabara are anything new, as this manga clearly demonstrates. 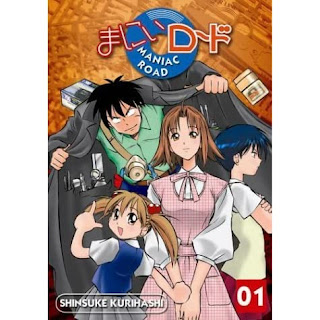 Takeru was an otaku on his last thread when he passed out in front of the Kinushima sisters' shop.  He was originally hoping to score an ultra-rare video game collectable, but instead he finds an opportunity.  The girls inherited their father's hobby shop, but since his death it's fallen on hard time.  If they can combine the shop's merchandise with Takeru's talent for model-making and a bit of promotional cosplay, then maybe they can turn around all of their fortunes for the better.

There are many manga out there about the otaku capitalist glories of Akihabara, but Maniac Road seems to be trying to recreate a long-past version of it.  It's kind of weird, honestly, considering that Akihabara's shift from electronics center to otaku mecca was long past by the time this manga was released and it's not meant to be a period piece.  Mostly it seems to exist more to justify Kurihashi's interests than anything else.

The cast is defined by one or two qualities at best.  Takeru is your stereotypical otaku: obsessed with pop culture at the expense of his own health and wealth, terrible at social interaction and bathing, and prone to speaking and thinking entirely in geek lingo.  The only mildly unexpected thing about him is his interest in model-building.  It's not like he's obsessed with Gunpla or anything like that - Takeru's specialty is building big, ornate models of old battleships.  By sheer narrative convenience, it turns out that the late Mr. Kinushima was also a giant military otaku whose prowess at model-building is renowned even years after his death and whose obsession ran so deep that he even named his daughters after battleships.  Only the power of hack writing narrative convenience could bring Takeru to this specific place and time!  I'm sure it has absolutely nothing to do with the author's own (increasingly out-of-style) interests at all!

For as much as they appear, the Kinushima sisters feel more Kurihashi took a few cues from the Tendou family in Ranma 1/2, made just enough changes to pass the plagarist sniff test, and called it a day.  The eldest girl, Haruna, is the motherly type.  The middle child, Aoba, is a grump who hates otaku.  The youngest, Isuzu, is a gamer girl and thus is the first to warm up to Takeru.  I can only hope that no one ever explains to this poor girl what Takeru means when he calls her "loliloli."  When they are not performing their set personality, they are undertaking a bit of (surprisingly chaste) cosplay as part of Takeru's business schemes.  Of course, it's Aoba who gets saddled with this task most often, just as she gets saddled with hints that she's being set up as the ultimate love interest for Takeru.

The rest of this volume is basically "let's put on a show model exhibit to save the community center store!"  It's predictable as hell, but it works fine as a set-up.  Beyond that, though, it's already clear that Kurihashi was already starting to run out of ideas.  Unless he spends the next few volumes building up this shallow cast into something more substantial or finding some more interesting and/or relevant bits of otakudom to explore, Maniac Road is on course to go nowhere fast.

Kurihashi's art is also something of a throwback, if not in a particularly interesting sort of way.  The girls are generically cute in a 'late '90s anime' sort of way, in that they are all long limbs and angles instead of short, round and squishy.  There's a bit more variety to Takeru and the other guys we see, but they're built more for zany comedy than anything else.  The backgrounds are suitably homely for what is meant to be a forgotten corner of Akihabara, but that also means it doesn't stick in the mind either.

Maniac Road isn't a chore to read, but mostly it's an artifact of a time, place, and mindset that were pretty much gone by the time of its release and has only grown more distant with time.

This series was published by ComicsOne.  This series is complete in Japan with 3 volumes.  All 3 volumes were released and are currently out of print.