Look, a gang is kind of like a club, right?  It totally counts for this purpose! 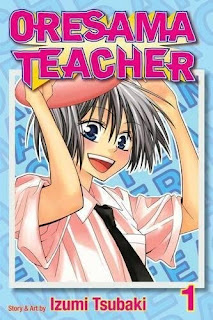 Mafuyu was the no-nonsense leader of her gang...at least, until they got in a big fight that led to her getting expelled from school.  Her mother is fed-up with Mafuyu's nonsense, so she sends her to Midorigaoka, a school that will take anyone willing to pay.  Mafuyu is willing to try to settle down and turn her life around but ends up getting into a fight on her first night there.  Worse still, she's discovered by Taokomi Saeka, a teacher at the school who himself is a former punk and a long-lost figure from Mafuyu's childhood.  She's not willing to give up her right to fight for justice, even if she has to wear a bunny mask to do it and urges her opponents to go straight afterwards.

I've heard good things in the past about this series from people who were reading this even before Tsubaki got famous thanks to Monthly Girls' Nozaki-kun.  I can see some of that potential in this first volume, but there's just one thing holding it back for me.

I can totally get behind the premise of a high school punk trying to make good by channeling her fighting spirit in a more positive direction.  I like this series when it gets particularly goofy, like the sections where Mafuyu inadvertently helps her classmate Hayasaka.  I really like Mafuyu herself as a character.  She's spunky, silly, tough, and endearing in equal measure and she charmed me right away.  I just wish this first volume was more worth of her because it spends way too long on the dynamic between her and Taokomi.

Way too much time is spent here building up the relationship (such as it is) between Mafuyu and Taokomi, with a lot of affectionate teasing that would suggest that he's going to be the love interest.  That doesn't really work when you remember that HE'S HER TEACHER, and the age and size difference between the two doesn't help things either.  I know this sort of age-gap thing is A Thing in shojo manga, but it feels completely disconnected from the rest of the story in both content and tone.  Hopefully once Tsubaki gets all the set-up out of the way, she ironed out all this awkwardness and figured out that her priority should be on her great heroine kicking ass for great justice and giggles.

Tsubaki's art remains something of an acquired taste.  It's definitely not the sort of series you read just for the art.  It's simple, sharp and lanky, lacking a lot of the ostentatious prettiness most people associate with shojo manga.  It works well for the comedy though, particularly when combined with her knack for big, goofy expressions.  The panels tend to be pretty plain and focus on the faces.  The actual fights are brief as hell, which makes sense considering that the story is not about how kicking ass looks awesome and more about Mafuyu covering things up afterwards.

When it gets going, Oresama Teacher can be a lot of fun. I just hope that once it's done setting up the premise, it can shift its focus towards its best, most fun qualities.