Once again, we're doing a month of BL manga reviews here at the Test Drive, but this year it's going to be double the reviews!  We're starting with a fairly recent book from a creator who has already made a splash with readers. 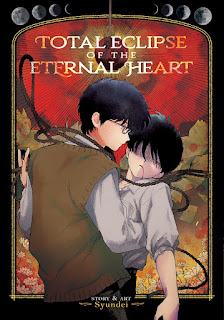 Terumichi finds himself hopelessly drawn to his alluring classmate Yamada.  As the two get close, strange things start to happen.  Random boys start stabbing and attacking Yamada, but Yamada is always able to walk away.  The more he investigates, the more he realizes that Yamada's strange personality, the attacks, and Terumichi's dreams are tied to a Taisho-era author and the nine boys he seduced and killed to fuel his work.

If you came into this book expecting something along the same lines as Go For It, Nakamura!, then you will be in for quite the shock.  Where Nakamura was sweet, awkward and sunny, Total Eclipse of the Eternal Heart is dark, moody, fatalistic, and just as good as its predecessor.

If anything, this book is a testament to how good of a writer Syundei can be.   The pace is slow and methodical, carefully revealing new information about Yamada and each new vision of the past.  She does not shy away from the darker acts performed, but neither does she revel in them to excess.  Much like Terumichi himself, the reader finds themselves drawn further and further into the mystery until it's far too late to escape.

Not surprisingly for a story that involves reincarnation, the emphasis here is on cycles, be they of violence or rebirth.  What starts as seemingly just another high school crush turns into a fated meeting of murderer and victim, trapped for decades in an endless circle of bloodshed and exploitation for no reason beyond one man using literary inspiration to justify his sociopathy.  It all leads up to the point where Terumichi seemingly submits to his fate, only to turn around and push back against it all in the story's surprising finale.  It's just an amazingly crafted mystery that must be experienced for oneself.

This book also features the same vaguely Takahashi-esque character designs that I found so charming in Go For It, Nakamura!, and amazing makes them fit just as comfortably here as they did there.  I guess it's fitting they should look somewhat old-fashioned considering all the flashbacks to 1920s Japan.  That being said, Syundei really pushes them to the limit.  She gets a lot of range and nuance of emotion out them without loosing what makes them attractive, even in the midst of bloody murder or traumatizing rape.

Did I mention that there was a lot more adult content here than in Nakamura?  Again, Syundei doesn't linger on the gruesome details, keeping the focus more on the reactions of the victims, but she also makes it clear just how depraved Yamada can be.  While her panels remain fairly small and unornamented, she also employs more dramatic angles and visual symbolism than usual in them which really adds to the drama of the story.

Total Eclipse of the Eternal Heart is a beautiful, dark, twisted masterpiece.  So long as you are willing and able to handle the content it has to offer, you will be rewarded with a great BL manga.

Also, for fuck's sake Seven Seas, just recognize your employee union already!  Spend money on your staff and books instead of on union-busting lawyers!

This book is published by Seven Seas.  It is currently in print.