It's Pride Month once more, so once again we're looking at some of the manga queer stories to be found within manga.  Of course, that includes BL, and we'll start with yet another gem from one of my favorites. 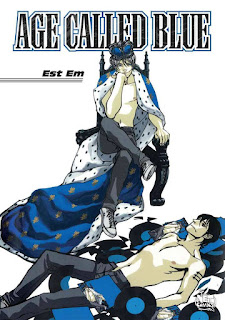 Nick and Billy have known each other since they were kids, bonding over their mutual love of music.  Eventually they form a band, with Nick on vocals, Billy on lead guitar, and both of them serving as songwriters.  Their friendship eventually turns into love, but it's a love that's increasingly tainted by Nick's selfish and self-destructive behavior.  Eventually, Billy comes to the point where he has to decide what's more important to him: Nick or the band.

Good ol' est em, once again she's writing what she knows best: tormented European artists and the romances between them.  Instead of bullfighters, dancers, or painters, this time she's focusing on a pair of British rockers whose passions simultaneously drives their music and destroys their love life.  It's a well-worn premise - this isn't even the first BL manga to focus on a band - but it's a good one.

The story is simple enough, but est em complicates it a little by telling parts of it out of chronological order.  We start at the moment our two leads realize their feelings for one another.  We follow the rise of the band and the fallout of their relationship more or less as it happens.  As Billy makes his impossible choice, we flash back to the point where Nick and Billy first met and a later point, not too long after the events of the first chapter, where the two discover that the lead singer and guitarist of their favorite band had a romantic relationship, not unlike the one that Nick and Billy would ultimately have.  It's a nice way of bringing the story full circle, and it helps to keep things from ending on a downer.

est em's knack for nuanced character writing it put to good use here.  She really captures the feeling of a self-destructive relationship.  From the start, Nick shows himself to be a self-centered asshole, even when he's trying to do good.  Meanwhile, Billy is aware that Nick's partying is wrecking both the band and Nick himself but he can't let go because he still treasures the good times of their youth and Nick's talent for songwriting.  It's a very complicated, messy thing, and she makes this abundantly clear without compromising the visceral, heartbreaking tragedy of their situation.

Their story isn't quite enough to fill out an entire volume, so we get a couple of unrelated short stories afterwards.  The first features two art students whose brief affair is mostly conducted through messages in a notebook.  The second is something of an anomaly for est em.  Instead of focusing on some sort of artisan, it's about a pair of Soviet cosmonauts who bond over the joys of space exploration and a rather unsubtle metaphor about satellites, which ends on a sad but hopeful note.  If there's anything that connects these stories to the title one, it's that they all share a theme of older men learning to live with both the joys and the regrets of a romance.

est em's art in Age Called Blue is more than up to her usual standard.  The men are handsome in an unusual realistic way for BL, with svelte musculature and body hair.  The faces are expressive and subtle, and she even manages to age them in ways that fit both their ages and the effects of a hard-partying life.

The backgrounds are unusually sparse for one of her works, with a lot of negative space.  Thankfully, this has no effect on est em's way with panel layouts, a skill that makes even mundane conversations sparkle and burn with unspoken feelings.  There's not a lot of straightforward smut here.  Instead the sex scenes are communicated with a jumble of limbs and lips.  It's messy and passionate, which makes it a perfect fit for the story.

Age Called Blue is a golden example of BL done right from one of its modern masters.  It builds great drama out of complex, damaged people instead of childish misunderstandings with beautiful art that amplifies the feelings already present in the story.

This book is currently published by Viz via the SuBLime imprint, and formerly by Netcomics.  The physical volume is out of print, but this series can be purchased digitally through SuBLime's website and other online vendors.