Now we're going to shift gears from one of CLAMP's earliest works to one of their latest series.  CLAMP's fortunes have risen and fallen greatly since that time.  One has to wonder if they still have the ability to make a really impressive, memorable manga.  Going by this, the answer is...um...kinda?  Maybe?  I dunno. 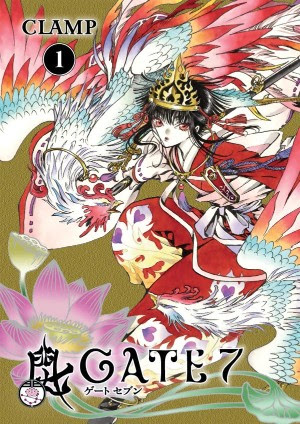 Chikahito has always been drawn to Kyoto.  He's never been able to fully explain why, but he feels a connection to the city and he's determined to make the most of his first trip there.  While wandering the streets, he finds him in the middle of a strange battle. He passes out, only to find himself in the home of his saviors: the tall and strapping pair of Tachibana and Sakura and the tiny, androgynous, noodle-loving, and deeply moe Hana.  These three turn out to be spiritual guardians caught up in a modern-day incarnation of historic battles, battles where the reincarnations of the great generals wield powerful oni against one another.  Now Chikahito has to choose a side whether he wants to or not, and his newfound power makes him a target for both sides.

When it first debuted, Gate 7 was somewhat anticipated.  It was CLAMP's first new, non-spinoff series in many years.  Maybe that's why it's so disappointing to see that all it led up to was a rehash of various bits and bobs from previous works tossed together with a bunch of the usual Sengoku-era mumbo-jumbo.

It's hard to read this and not get a few flashbacks to xxxHolic because of Chikahito.  He not only bears a good degree of resemblance to Watanuki, he's also a great cook like him.  It's because of that quality that this series sometimes threatens to become little more than a litany of various Kyoto-area noodle dishes.  At the same time, Chikahito is also far less interesting than Watanuki was even at this early stage.  Watanuki was grumpy and contrary, but it was obvious even from the earliest points in his story that those were merely symptoms of his loneliness and pride.  Chikahito is far more gentle and temperate in comparison, but that means that he also tends to blend into the background more readily and that's a bad quality in a protagonist.  He's frequently forced into situations instead of choosing to join them, so he's a hero that basically gets overwhelmed by his own story.  That's not a promising foundation for a story.

So eventually the story reveals itself to be yet another modern-day reincarnation of Sengoku-era battles that has become something of a trend in recent years.  Hell, I'm surprised that they haven't already broken out the reincarnation of Oda Nobunaga at this point, since he always seems to be the one they break out right away for otaku appeal.  Here, though, CLAMP has taken a more esoteric take on the battles.  They aren't literal battles so much as they are on magical duels fought by supernatural familliars.  Wait a minute...this is basically a tournament-style fighting series!  Sure, the ranks and the purpose are hazy at best, but it's just one long power struggle with the leads working their way up to the ultimate boss.

While CLAMP tries to sneak that fact under the readers' noses, they do their best to try and build up the mystery around the premise and Chikahito.  Are they successful?  It's hard to say.  The problem is that everything is affected by it: the battles, the opponents, the powers involved, all of this and more is explained as vaguely as possible even as they keep adding more and more Sengoku-period people and places.  They even try to make Hana's gender a mystery, but this feels more like fangirl baiting than anything else.  Anyway, all this cyrpticness ends up backfiring in CLAMP's face.  I don't find myself intrigued by the mystery, I just want them to stop and explain something - anything!  It's especially confusing for non-Japanese readers as most of us are not deeply familiar with all of these names and places.  Dark Horse does their best by adding plenty of translation notes, but I honestly couldn't tell one personage from the other.

It's a shame to take such a premise and drag it down so fast by being too vague and too focused on the dinner table.  Instead of getting a strong, clear, and engaging premise, we get something that doesn't feel too far removed from the messy, mixed-up dregs of Tsubasa.

CLAMP's storywriting might be found wanting, but their artwork is still top-notch.  There's a softness to the characters that you don't see in their more recent series, especially around the eyes and hair.  It almost reminds me of the artstyle they used for Kobato, but maybe that's just because Hana tends to make a lot of the same expressions she does.  Otherwise they all fit fairly comfortably in the noodle person mold that CLAMP has employed for the last decade or so.  If there's any sort of visual highlight to this series, it's the fight sequences.  It's only during these times that the panels open up.  They start dramatically, as the world goes as still and dark as water with only the characters standing in relief.  Then they burst forth into massive and lively swirls of magic the likes of which I haven't seen since Magic Knight Rayearth.  Sometimes it goes too far and the characters start to get lost in the chaos, but the overall effect is stunning.  Unusually for CLAMP, there are a lot of blatantly rotoscoped backgrounds taken from (presumably) real-life places in Kyoto.  It's an understandable choice for them to make, but they still come off as flat and lifeless.  Overall Gate 7 is a pretty book to look at, but sometimes it can get as muddled as the story.

It's not unfair to say that Gate 7 is a return to form for CLAMP, but that's not necessarily a good thing.  It's a return to form in a positive way when it comes to the art, which brims with beauty and energy.  It's a bad thing when it comes to the story because it means that they're falling back on old, bad habits and schtick.  I don't get a sense that there's a clear plan of any sort behind this manga, and I fear that this will lead to disaster.

Don't forget to check out my latest Crunchyroll Manga Sampler over at Infinite Rainy Day.  Astronauts! Violence! Incest!  All of this and more is contained within the article!