First of all, I recently appeared on the latest episode of The Five Point Podcast.  I've long been a fan of it, and it was fun to get to participate in one for once (and I hope to do more of them in the future).  So, if you're curious as to what I actually sound like, listen to me give my thoughts on Yamada's First Time:


With that done and said, on to the review!  Once again, I'm looking at another member of the Showa 29/Forty-Niners group of mangaka.  Instead of sci-fi, though, this is more of an intimate drama.  It's no less influential than To Terra was, though, and its subject matter and presentation reflect this. 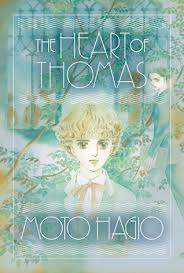 In early 20th century Germany, at an all-male academy, a young boy has died.  Thomas Werner was loved by much of the student body, and his death (presumed to be an accident) is a terrible shock to them.  Only one person, the stoic and reserved Juli, knows the truth: Thomas's death was a suicide.  Juli knows because Thomas wrote him a suicide note that also served as a confession of love to Juli, and Juli finds himself loaded with guilt over Thomas's actions.  His guilt only increases when a new boy, Erich, comes to the school.  Erich is a brilliant child and a major mama's boy, but he is also the spitting image of Thomas, and both Juli and Erich hate the baggage such a connection brings them.  Over time, Juli, Erich, and Juli's roommate Oskar must come to terms with not only Thomas's death, but the guilt they all bear from their own pasts.

This book is not so much an emotional journey as it is an emotional saga.  It's the sort of story that could have only been found in 1970s shoujo, the sort of story that is saturated in repression and every sort of heightened emotion.  Heart of Thomas is all at once haunting, sensitive, and deeply tragic without ever descending into melodrama, and it's easy for me to see how this story became a classic.

As mentioned before, Hagio was one of the members of the storied Showa 29 group, and in many ways she could be considered the grandmother of boys' love as a genre.  Heart of Thomas was not her first shonen-ai work, but it is still considered one of the groundbreaking works of the genre.  As the incredibly informative essay by translator Matt Thorn explains, Hagio was inspired by the French film Les Amities Particulaires.  In it, two French schoolboys fall in love only to be forced apart by their teachers, and one of them ends up committing suicide.  Hagio took that scenario and essentially turned on its ear for Heart of Thomas.  Here the suicide isn't the culmination of a tragic romance, but the catalyst that sets things into motion, an act that haunts the main characters for much of the story.

While Thomas may be the titular character, the story is really about three of the boys left behind after his death: Juli, Oskar, and Erich.  While not all of them knew Thomas, his death ends up being the key to unlocking and moving past the guilt that each boy bears in his own life.  Juli looks and acts prim and proper, but this is merely the front he presents to others to hide all the guilt he bears over Thomas, his own family, and a terrible incident with an older student.  Oskar is more laid-back and personable, often serving as advisor and mediator to his fellow students, but he too is caught in a family drama where no one is quite willing to speak the truth.  Finally there is Erich, who is a brilliant student but a fragile and sensitive boy.  He's obsessed with his mother in a fashion that verges upon incestuous, and he only wishes to return to her so that things can go back to the way they were.  He wants no part of his mother's new husband, his schoolmates fawning over his looks, or everyone connecting him to a dead boy he never even knew.  All of them are affected by Thomas, be it in life or in death, and ironically it is that same death which allows them to move on with their lives and begin the long, tough process of growing up.

While this work is considered a pioneer in shonen-ai, the actual homoerotic content is fairly subtle.  There's no hardcore action to be found here, and no one in particular identifies as gay.  Instead we have a lot of talking about feelings, emotional outburst, and the occasional tearful kiss.  Honestly, Hagio's approach to the story reminded me a lot of modern-day yuri.  They take similar approaches to relationships in that the emphasis is more on deep romantic longing instead of lustful desire.  There's a subtle implementation that these feelings are transitory, just the fleeting crushes of a bunch of kids that don't have a lot of heterosexual outlets.  It's even set in a single-sex school, although the notion of such places being hotbeds of homosexuality far predate this story.  Such notions don't diminish the intensity of the feelings and relationships on display, it might be a little jarring for those more used to more modern, explicit works.

The pacing here is slow and purposeful.  Hagio is more than content to let the emotion and mystery build bit by bit, day by day.  Little hints about the characters are dropped here and there, little flashes of memory pass by, and each one builds upon the reader's knowledge of our three main characters.  Admittedly, Juli's inner monologue gets the most attention, but then as we learn he has the most guilt to bear.  He not only has the burden of Thomas's feelings, but also the guilt his family lays upon him for his parentage, guilt about his faith in God, and guilt from abuse at the hand of a former classmate.
Juli tries so hard to keep his emotions contained and tries so hard to push away those that disturb his self-enforced calm, so of course it is his many fits and agonies that end up splashing across the page. While guilt and repression are common elements here, there's also a great emphasis on family secrets.  Between the three boys, they have to deal with their families hiding things like affairs, wrongful deaths, even physical and emotional abuse.   Still, Hagio keeps things hopeful - all these secrets and all this guilt might threaten to crush the boys' spirits, but once they actually start talking with others about it, they can start to find acceptance and forgiveness for themselves and others.

Heart of Thomas is an achingly beautiful romantic drama.  While the focus tends to be on internal torment versus external action, the thoughts and troubles of these three young men remain compelling and touching.  The story's sensitive approach to what was then a brand-new genre demonstrates just why this story became a classic.

Hagio's art is a shining example of 1970s shoujo art.  The character designs are pretty and slender with flowing hair and shiny, jewel-like eyes that seem to stare into the reader's soul.  Hagio doesn't put in a lot of period-specific details beyond the boys' wardrobes, with their fine, crisp suits, slender knotted ties, and long, boyish curls.  The thoughts of her characters are given shape in dramatic explosions of screentones, wind, fire, flowers, and ghostly silhouettes, layered behind the characters like so many drifting clouds.  There's also a fair bit of angelic imagery within them, which makes sense considering all the talk of death and guilt over one's sins.  There's an overall delicacy to Hagio's art which enhances the equally fragile, emotional tone of the story.  Even the few instances of coloring are delicate, mostly rendered in shades of magenta.

This series is presented in a large hardbound volume which is as handsome as it is dense.  As mentioned before, there's a very informative essay after the story which does a great job at putting both Moto Hagio's career and Heart of Thomas in historical context.  It's mildly distracting that the essay reads right-to-left, considering that the manga itself is unflipped, but that's the only (and decidedly minor) complaint I have about this book.

Major kudos have to be given to Fantagraphics for releasing this classic shoujo series to English speaking readers.  Heart of Thomas is beautiful, touching, romantic, tragic, and so much more.  It's got a hefty size and somewhat hefty pricetag, but it is worth every single penny.

This series is published by Fantagraphics.  This series is complete in 3 volumes, which are presented in a single omnibus.  It is currently in print.

You can purchase this volume and many more like it through RightStuf.com!
Posted by Megan D at 6:50 PM